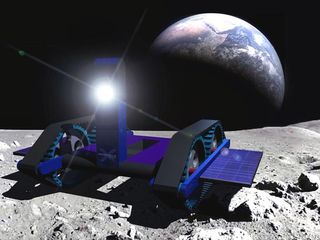 In spite of their contrasting approaches, team leadersspeaking July 20 during a panel discussion on the prize were uniformlyoptimistic that lunar transportation services would be profitable. Participantscited a study released July 16 by the Futron Corp. predicting a $1 billion to$1.5 billion market for commercial lunar services during the next decade. Thestudy by Futron, a consulting firm in Bethesda, Md., identified six markets forlunar services: hardware sales to governments around the world, services forgovernment customers, products for the commercial sector, entertainment, sponsorship,technology sales and licensing.

Before they can reap the rewards of those markets, however, teamswill have to make a significant investment to reach the Moon. Bob Richards,chief executive for Odyssey Moon Ltd., a company formed on the Isle of Man oneyear before the lunar prize was announced, said an extremely efficient missionto send 30 kilograms to 50 kilograms to the Moon would cost approximately $100million.

Richards said the Futron study confirms his view thatcustomers will line up to send payloads to the Moon once a reliable service isin place. "Our goal is to prove that the private sector together withgovernment can provide transportation services to the Moon and establish aneconomic base and a viable business case to continue operations," Richardssaid.

Odyssey Moon announced July 29 that it had signed up itsfifth customer, the International Space School Education Trust. Moonlink Ltd.of Yorkshire, England, has contracted with the Education Trust to reserve 1kilogram on Odyssey Moon's first flight, dubbed MoonOne, for a scientificinstrument to be selected by a competition for Yorkshire schools andindividuals. Paragon Space Development Corp. of Tucson, Ariz., also announcedplans to send an experiment on MoonOne to grow mustard seeds, and Celestis, apart of Space Services Inc. of Houston, hired Odyssey Moon to carry a memorial capsulewith cremated remains to the Moon or into lunar orbit. In addition, theInternational Lunar Observatory Association, based in Hawaii, plans to sendaloft a scientific instrument to collect astrophysical and in-situ information,and the Netherlands Organization for Applied Scientific Research plans tolaunch a modified version of a spectrometer designed originally for theEuropean Space Agency's Aurora Mars exploration program.

In addition to building a customer base, Odyssey Moon isseeking investors to finance its flights. During the next six months, Richardssaid Odyssey Moon will embark on a second round of financing with a group ofnew partners: Near Earth LLC, an investment bank based in New York; WPP Group,a London-based marketing and communications firm; Milbank Tweed Hadley andMcCloy LLP, a law firm based in New York; and Aon International Space Brokers,an insurance company from Chicago.

The economic downturn is making it challenging to raisemoney, "but it is not so daunting that it has discouraged us,"Richards said. "If you have a good business plan, the economic climatedoesn't matter."

Michael Joyce, founder of another Google Lunar X Prizecompetitor, Next Giant Leap, said the economic slowdown may even benefit histeam because investors have little prospect of making money in the short term."It has shown investors that they need to be looking at a little bitlonger time horizon, so that has helped us," Joyce said.

The Next Giant Leap team, which was known simply as theMystery Team during the first year of the competition, includes Sierra NevadaSpace Systems of Littleton, Colo., the Massachusetts Institute of Technology(MIT) Space Systems Laboratory and the Draper Laboratory, both of Cambridge, Mass.,and Aurora Flight Sciences of Manassas, Va. The team's Moon lander designis based on existing spacecraft built by Sierra Nevada, while Draper Labs isoffering guidance, navigation and control expertise.

The MIT students, led by former astronaut Jeff Hoffman,unveiled a prototype robot in June designed to hop across the Moon's surface.The students are scheduled to complete testing of the prototype within oneyear, Joyce said on July 20.

While Next Giant Leap is seeking investors, the team is alsofinanced in part by an unusual method. Joyce, the owner of B9 CreationsLLC of Deadwood, S.D., manufactures and sells $24,500 replicas of therobot featured in the 1965 television series "Lost in Space."

Another Google Lunar X Prize team, AstroboticTechnology led by Chairman William "Red" Whittaker of CarnegieMellon University's Robotics Institute in Pittsburgh, already has built threeprototype rovers designed not only to win the initial $20 million prize, but towin millions of dollars in bonus prizes with its first mission scheduled forMay 2011. During that mission, called Tranquility Trek, the Astrobotic robot isdesigned to travel to the Apollo 11 site and send back imagery showing theimpact of weather, radiation and meteorite bombardment on hardware left there.

According to the lunar prize rules, the first team to land onthe Moon, travel 500 meters and send back a 1 gigabyte "Mooncast"including high-definition still and video images by Dec. 31, 2012, will win $20million. If that goal is not accomplished, a prize of $15 million will beavailable until Dec. 31, 2014. No prize will be awarded after that unless therules are changed by sponsors Google Inc. and the X Prize Foundation of PlayaVista, Calif. The second team to reach the Moon by Dec. 31, 2014, will win $5million. Teams that complete additional tasks, such as traveling 5,000 meterson the lunar surface, sending back imagery of Apollo hardware, discoveringwater and surviving the cold lunar night, will be eligible for $5 million inadditional prizes.

The Astrobotics team includes the University of Arizona'sLunar and Planetary Laboratory in Tucson, Ariz., to design and build therover's cameras, and Raytheon Co. of Waltham, Mass., to help design the spacecraft.

Team Synergy Moon, which joined the competition in February,is a collaboration of space enthusiasts, filmmakers, artists and adventurersfrom around the world. The team's goal is to interest young people in spaceexploration, Myrick said. To raise money for the Lunar X Prize competition,Team Synergy Moon plans to hold art festivals, concerts and public technologydemonstrations around the world.

In contrast, Frednet is focused on creating an open sourcelunar mission. "We want to prove that a group of open source developerscan come together, work together and solve problems," Bourgeois said."I'm trying to draw in as many people as I can find with math, science andengineering backgrounds in an open source, open participation project."

Members of Team Frednet are developing multiple roversincluding a 72.5 gram ball based on a Lego Mindstorm model kit and a 4 kilogramrover. In addition to competing for the Google Lunar X Prize, Team Frednetmembers are interested in sending small satellites into low Earth orbit andestablishing a digital communications network to serve future Moon missions,Bourgeois said.