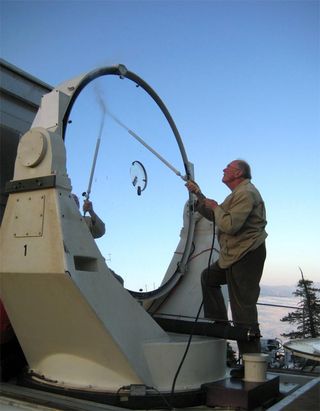 UC Berkeley physicist Charles Townes cleans one of the large mirrors of the Infrared Spatial Interferometer (ISI). The ISI consists of three 5.4-foot (1.65-meter) diameter mirrors separated by distances that vary from 12 to 230 feet (4 to 70 meters).
(Image: © Cristina Ryan (2008))

A massivered star in the constellation Orion has shrunk in the past 15 years and astronomersdon't know why.

CalledBetelgeuse, the star is considered a red supergiant. Such massive stars arenearing the ends of their lives and can swell to 100 times their original sizebefore explodingas supernovae, or possibly just collapsingto form black holes without violent explosions (as one study suggested).

Betelgeuse,one of the top10 brightest stars in our sky, is a popular target among backyardskywatchers and was the first star ever to haveits size measured, and even today is one of only a handful of stars thatappears through the Hubble Space Telescope as a disk rather than a point oflight. It was the first star (besides our sun) to have its surfacephotographed (by Hubble).

The newfinding, presented today at a meeting of the American Astronomical Societyin Pasadena, Calif., was based on data collected by UC Berkeley's Infrared SpatialInterferometer (ISI) on the top of Mt. Wilson in Southern California.

In 1993,measurements put Betelgeuse's radius at about 5.5 astronomical units (AU),where one AU equals the average Earth-sun distance of 93 million miles, orabout 150 million km. Since then it has shrunk in size by 15 percent. Thatmeans the star's radius has contracted by a distance equal to the orbit ofVenus.

"Tosee this change is very striking," said Charles Townes, a UC Berkeleyprofessor emeritus of physics. "We will be watching it carefully over thenext few years to see if it will keep contracting or will go back up in size."(Townes won the 1964 Nobel Prize in physics for inventing the laser and themaser, a microwave laser.)

Though thestar is shrinking, its visible brightness has not dimmed significantly over thepast 15 years, the researchers say.

"Butwe do not know why the star is shrinking," said Edward Wishnow, a researchphysicist at UC Berkeley's Space Sciences Laboratory. "Considering allthat we know about galaxies and the distant universe, there are still lots ofthings we don't know about stars, including what happens as red giants near theends of their lives."

Townes, whoturns 94 in July, plans to continue monitoring Betelgeuse in hopes of finding apattern in the changing diameter, and to improve the ISI's capabilities byadding a spectrometer to the interferometer.

"Wheneveryou look at things with more precision, you are going to find some surprisesand uncover very fundamental and important new things," he said.

The findingwas also published June 1 in the Astrophysical Journal Letters.