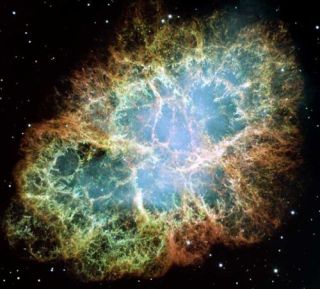 The Crab nebula is the result of a type II supernova explosion observed by Chinese astronomers in 1054. The nebula consists of the outer parts of a red supergiant that exploded after having burned all its fuel.
(Image: © Hubble Space Telescope)

Telescope imageshave confirmed something astronomers have long suspected, that red supergiantstars are the stars that explode in so-called type II supernovas.

Type IIsupernovas are the impressive cosmicexplosions that result from the internal collapse of a massive star. (Forthis reason, they are also known as core-collapse supernovas.)

On average,a supernovawill occur about once every 50 years in a galaxy the size of the Milky Way. Butscientists don't know when these stellar powder kegs will blow, so identifyingthe star that birthed them, called the progenitor star, can be tricky.

Models andobservations had suggested that red supergiants were the progenitors of type IIsupernovas, but the best evidence so far has only been able to show that thesestars were in the area before the supernova, not that that they were in theexact spot.

So astronomerJustyn Maund of the University of Copenhagen in Denmark and the University ofCalifornia, Santa Cruz, and his colleagues used telescope images to answer thequestion, "How sure are we that this is the progenitor?" he said.

They usedimages from the Hubble Space Telescope and Gemini Telescope from beforeand after two supernova explosions, SN 2003gd and SN 1993J. They found thatthere were indeed red supergiants in the exact spots where the blasts occurred beforehand,and that after, "the progenitor is missing," Maund said.

The finding,detailed in the March 20 issue of the journal Science, confirms thelong-standing theory behind type II supernova formation. "There's no otherway you could get around it in this case," Maund told SPACE.com.

It takesawhile for scientists to get such confirmations because they have to wait forthe glare of supernovas to die down before they can get a proper "afterimage," which can take many years.

Maund andhis team were able to estimate that the progenitor stars had masses that wereabout seven times the mass of our sun. They were also able to show that SN1993J's companion, which sucked away much of its partner's outer hydrogenenvelope, was still hanging around.