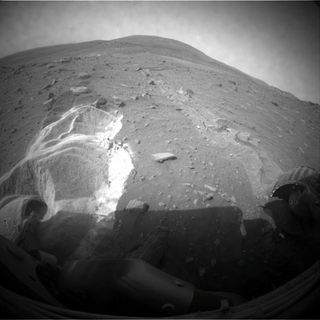 Wheel slippage during attempts to extricate NASA's Mars Rover Spirit from a patch of soft ground during the preceding two weeks had partially buried the wheels by the 1,899th Martian day, or sol, of the Spirit's mission on Mars (May 6, 2009). Spirit took
(Image: © NASA/JPL-Caltech)

NASA ispulling out all the stops to try to get the mired Spirit rover out of theMartian sand and rolling again.

NASA'srover project team is using the Spirit rover and other spacecraft at Mars tobegin developing the best maneuvers for extracting Spirit from the soft Martianground where it has becomeembedded.

Thepossibility of the wheel being jammed was one factor in the rover team's May 7decision to temporarily suspend drivingSpirit after that wheel stalled and other wheels had dug themselves abouthub-deep into the soil.

Adiagnostic test on May 16 provided some encouraging news: electrical resistancein the left middle wheel is within the expected range for a motor that has notfailed.

"Thisis not a full exoneration of the wheel, but it is encouraging," said JohnCallas of NASA's Jet Propulsion Laboratory, Pasadena, Calif., project managerfor Spirit and its twinrover, Opportunity. "We're taking incremental steps. Next, we'llcommand that wheel to rotate a degree or two. The other wheels will be keptmotionless, so this is not expected to alter the position of the vehicle."

Anotherreason to suspend driving is the possibility that the wheels' digging into thesoil may have lowered the body of the rover enough for its belly pan to be incontact with a small mound of rocks.

The roverteam is using Opportunity to test a procedure for possible use by Spirit:looking underneath the rover with the microscopic imager camera that is mountedon the end of the rover's arm. This might be a way to see whether Spirit is, infact, touching the rocks beneath it.

Spirit and Opportunity have been trundling across the Martian landscape for morethan five years now.

NASA's MarsOdyssey orbiter is also aiding in the Spirit recovery plan. As a result ofwinds blowing dust off Spirit's solar panel four times in the past month,Spirit now has enough power to add an extra communication session each day. TheOdyssey project has made the orbiter available for receiving extratransmissions from Spirit. The transmissions include imaging data from Spirit'sexaminations of soil properties and ground geometry.

Rover teammembers are using that data and other information to construct a simulation ofSpirit's situation in a rover testing facility at JPL. The team is testingdifferent materials to use as soil that will mimic the physical properties ofthe Martian soil where Spirit is embedded. Later, the team will test maneuversto get the rover free. Weeks of testing are anticipated before any attempt tomove Spirit.