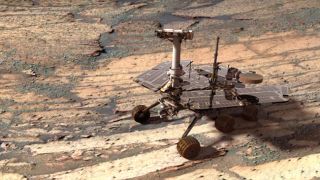 Their90-day warranty expired awhile ago, but NASA's twin Mars rovers Spirit and Opportunity are still trundling along the Martian surface en route to their nextdestinations more than five years after landing on the red planet. But just howlong they can keep going is anyone's guess ? it could be three days, or itcould be three years.

"Wehave no way of knowing what the future holds for the rovers at thispoint," said Mars Exploration Rover Mission principal investigator SteveSquyres of Cornell University. "The mission could easily end tomorrow, butthe miracle could continue."

Thatmiracle began with the January 2004 landings of the two rovers. Spiritgot to Mars first, touching down at Gusev Crater on Jan. 3. A few weeks later, Opportunitybounced to a stop in the vast plains of Meridiani Planum on the other side ofthe planet.

The roadhas been a bumpy one ? sometimes literally ? with stuck wheels, broken wiringand Spirit's one bum wheel periodically hampering the mission.

But evenwith those hiccups, the pastfive years (that's 20 times the planned lifetimes of the rovers) haveyielded many insights into the planet's past and present and taught missioncontrollers numerous lessons about running a mission from millions of milesaway.

Among themany remarkable discoveries the rovers have made are the clues that show theplanet has not always been as cold and dry as it is at present ? at one time,it was warm and wet enough to support life.

More than1,200 sols (or Martian days) into the mission, Spirit analyzed a patch of dirtand found it was rich in silica, which provided some of the strongest evidenceyet that the Martian surface was once wet.

Opportunity found salty areas in MerdianiPlanum that have garneredmany watery theories to explain how they go there.

Thesescientific findings aren't the only useful information to come out of themission.

"Spiritand Opportunity helped invent a whole new discipline ? robotic fieldscience," Squyres said. "They've taught us how to organize a team ofscientists and engineers to operate robotic rovers on a distant planet. We allhad to learn to work together effectively year after year to squeeze the mostpossible science from the rovers."

Team memberslearned many of the perils of maneuvering a wheeled robot from hundreds ofmillions of miles away.

"Wenow know how to negotiate sand dunes and piles of rocks," Squyres said,"and perhaps more importantly, how to avoid them."

That experiencewill help with future missions, such as the upcoming Mars Science Laboratory,currently slated to launch in 2011.

The snagshit along the sustained mission have left the rovers with some bruises. Spirit,for example, has been driving backwards since one of its wheels jammed in 2006,and a broken electrical wire has reduced the movement capabilities of Opportunity's robotic arm.

Spirit alsohad a glitch earlier this year that caused it to not report in to missioncontrollers as planned, but eventually the rover resumednormal behavior. Spirit was on its way to its next target, von Braun, acap-rock about 800 feet (250 meters away).

Opportunity has fared a little better; it'sbeen "the lucky vehicle since Day 1," Squyres said. However, therover did recently adjust itscourse to get around obstacles while working its way toward its nextdestination, Endeavor Crater, some 7 miles (12 kilometers) away.

Endeavorwill be the largest crater that Opportunity has yet investigated; it is about12 miles (20 km) in diameter and hundreds of meters deep.

"Endeavoris an intriguing target because the rocks close to it look different from theones surrounding the other craters Opportunity has visited," said deputyprincipal investigator Ray Arvidson of Washington University in St. Louis. "Part of Endeavor crater's rim is sticking up ? Mars' ancient bedrockexposed ? and rocks nearby may be suggestive of acidic lakes on Mars' surfacebillions of years ago."

The tripwon't come without its costs though.

"We'llhave to double the odometer reading on a five-year-old vehicle to getthere," Squyres said. "And it will take at least two years to reachit."

Opportunity can manage about 300 feet (100meters) of traveling on an average day.

"It'llbe a long march across the plains, but it will be well worth it," Squyressaid. "The deeper the crater, the older the history of Mars we can lookat."

Spiritwon't have quite as long a trip as its target is a bit closer, but the journeywill still take a few months. Spirit's mechanical issues make its trip a littletrickier.

"Spiritis the more challenging rover to operate," Squyres said. "There's notas much wind at its location to clean the solar arrays, and that affects thevehicle's power."

Luckily,Spirit recently gota power boost when some Martian winds wiped some of the dust off its solarpanels.

"Also,Spirit has to travel more challenging terrain," Squyres added. "Therocks and loose sand at Spirit's location are treacherous. Of course, to top ifall off, Spirit is driving backwards."

But thetrip to von Braun and its subsequent target, a feature dubbed Goddard, will beworth it.

"HomePlate, where Spirit spent the winter, is a volcanic structure eroded down so wecan see the layers," Arvidson said. "And we think von Braun and theneighboring Goddard structure may be made of the same stuff."

Even withthe periodic glitches and mechanical issues encountered so far, the rovers havestood up to the test.

And whilemission controllers are aware of the limitations of the rovers, it's almostimpossible to predict when the rovers might stop for good.

"They'reso far out of warranty it's hard to predict," Arvidson said.

The mostvulnerable parts of the rovers are any parts that move, Arvidson told SPACE.com.The rovers are also exposed to large swings in temperature throughout the daythat stress their systems.

Though therovers will be checking out rocks and other features on the way to theirprimary targets, the team will also likely minimize the movement of certainrover parts needed to investigate the Martian environment, Arvidson said.

"Wewant to save those capabilities for the really juicy targets," he said.

Manymechanical issues can be worked around too, as Spirit is currently doing withits broken wheel.

"We'vegot an enormous amount of functional redundancy built into thesevehicles," Squyres told SPACE.com in an email. "So a lot cango wrong and still allow us to do good science."

Predictinghow fast different mechanical systems will wear out is difficult though, and ofcourse that's not the only limiting factor.

"Ifnothing mechanical stops us, then sooner or later the capacity of the batterieswill degrade to the point where they no longer can hold enough charge,"Squyres said. "But we don't know how long that will take either."

If therovers get to the point where their roving days are over, they could stilloperate for a time as a weather station, something like Viking1 did when its primary mission was finished, Arvidson said.

"If welose mobility completely, then yes, we can poke around at the place where westop," Squyres said. "But if the scenery isn't changing, sooner orlater you reach a point of diminishing returns."