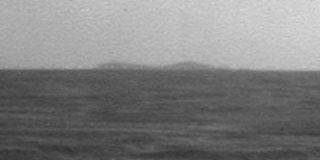 A northern portion of the rim of Endeavour Crater is visible on the horizon of this image taken by the panoramic camera (Pancam) on NASA's Mars Exploration Rover Opportunity on March 7, 2009, during the 1,820st Martian day, or sol, of the rover's mission on Mars.
(Image: © NASA/JPL-Caltech/Cornell)

Thepanoramic camera on NASA's Mars rover Opportunity has caught a first glimpse onthe horizon of the uplifted rim of the big crater that has been Opportunity's long-term destination for six months.

Opportunity's twin, Spirit,also has a challenging destination, and last week switched to a different routefor making progress to it.

EndeavourCrater, 14 miles (22 kilometers) in diameter, is still 7 miles (12 kilometers)away from Opportunityas the crow flies, and at least 30 percent farther away on routes mapped forevading hazards on the plain.

"Wecan now see our landfall on the horizon. It's far away, but we can anticipateseeing it gradually look larger and larger as we get closer to Endeavour,"said Steve Squyres of Cornell University, and the principal investigator forthe rovers' science instruments. "We had a similar experience during theearly months of the mission watching the Columbia Hills get bigger in theimages from Spirit as Spirit drove toward them."

Opportunityhas already driven about 2 miles (3.2 kilometers) since it climbed out ofVictoria Crater last August after two years of studying Victoria, which is lessthan one-twentieth the sizeof Endeavour.

"It'sexciting to see our destination, even if we can't be certain whether we'll everget all the way there," said rover project manager John Callas of NASA'sJet Propulsion Laboratory in Pasadena, Calif. "At the pace we've madesince leaving Victoria, the rest of the trek will take more than a Martianyear." A Martian year lasts about 23 Earth months.

Both roverslanded on Mars in January 2004 to begin missions designed to last for threemonths. Both are still active after morethan five years.

For thenext several days, the rover team plans to have Opportunity use the tools onits robotic arm to examine soil and rock at an outcrop along the route therover is taking toward Endeavour.

"We'restopping to taste the terrain at intervals along our route so that we can watchfor trends in the composition of the soil and bedrock," Squyres said."It's part of systematic exploration."

The pausealso gives Opportunity a chance to rest its right-front wheel, which has beendrawing more electric current than usual, an indication of friction within thewheel. This strategy has worked in the past.

Also, onMarch 7, the rover did not complete the backwards-driving portion of itscommanded drive due to unanticipated interaction between the day's drivingcommands and onboard testing of capabilities for a future drive. The team isanalyzing that interaction before it will resume use of Opportunity'sautonomous-driving capabilities.

Meanwhile,on March 10, the rover team decided to end efforts to drive Spirit around thenortheastern corner of a low plateau called "Home Plate" in the innerbasin of the Columbia Hills, on the other side of Mars from Opportunity. Spirithas had the use of only five wheels since its right-front wheel stopped workingin 2006. Consequently, it usually drives backwards, dragging that wheel, so itcan no longer climb steep slopes.

"Afterseveral attempts to drive up-slope in loose material to get around thenortheast corner of Home Plate, the team judged that route to beimpassable," Callas said.

The newroute to get toward science targets south of Home Plate is to go around thewest side of the plateau, though even it could prove tricky.

"Thewestern route is by no means a slam dunk. It is unexplored territory. There areno rover tracks on that side of Home Plate like there are on the easternside," Squyres said. "But that also makes it an appealing place toexplore. Every time we've gone someplace new with Spirit since we got into thehills, we've found surprises."