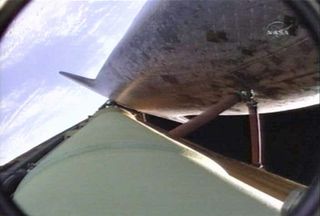 The belly of the shuttle Atlantis will get an up-close look during May 12, 2009 inspections during the STS-125 mission to the Hubble Space Telescope.
(Image: © NASA TV.)

Thespaceflyers used an inspection pole tipped with laser sensors and cameras toseek out any dings in the heat-resistant panels lining the spacecraft?s wingedges and nose.

Theshuttle?s heat shield health will be a key concern for NASA throughout therisky mission to overhaulHubble. The space agency has put the shuttle Endeavour on standby to fly arescuemission to retrieve the Atlantis astronauts if their spacecraft is damagedbeyond repair.

Atlantisand its crew of seven astronauts launched toward Hubble on Monday to beginNASA?s fifth and final mission to the 19-year-oldspace telescope. After the successful liftoff, NASA technicians were surprisedto find damage at the launch pad from the fiery blast of the shuttle?s rocketengines, agency officials said.

Atlantis isdue to arrive at Hubble on Wednesday and is about 8,000 miles (12,874 km) andclosing on the telescope. The astronauts plan to perform five consecutivespacewalks to add two new cameras, repair two other instruments never designedto be repaired in space and perform other maintenance.

Some piecesof debris were spotted falling from the shuttle?s external tank and boosters duringlaunch, but none of the pieces appeared to cause any damage, NASA officialssaid.

?They?revery minor from what we could observe,? NASA?s space operations chief BillGerstenmaier said after launch.

NASA haskept a close watch on shuttle heat shield health since 2003, when a piece offuel tank foam struck the Columbia orbiter?s wing and led to its destructionand the loss of seven astronauts. Now, astronauts inspect their shuttle heatshield twice on every mission.

Today,Atlantis commander Scott Altman and his crew conducted extended version of heatshield scans used on missions bound for the International Space Station. Thescan is one of two to make sure Atlantis is not damaged by launch debris orspace junk.

The areaaround Hubble?s 350-mile (563-km) orbit is littered with space trash, givingAtlantis a slightly higher chance of being struck by debris or micrometeorites,NASA officials have said. But the risk is still within NASA?s acceptablelimits, they added.

Back onEarth, NASA technicians are evaluating the damage to Atlantis? launch pad causedwhen the shuttle blasted off Monday. The damage was spotted in the pad?s flametrench, which funnels rocket engine exhaust away from a shuttle during liftoff.

Somenitrogen and pressure lines were damaged, as well as a 25-square-foot sectionof the heat-resistant coating that covers the bricks beneath the launch pad,NASA spokesperson Allard Beutel told SPACE.com. The damage is lesssevere than that seen during a launch last year, and can be repaired in timefor NASA?s next mission in June, he added.

Today?sshuttle survey will take nearly 10 hours to complete - about twice as long asnormal - because the Atlantis crew must inspect the thousands of black,heat-resistant tiles covering the spacecraft?s underbelly. On missions to thespace station, the same area is covered in photographs taken by astronautsinside the orbiting laboratory while the shuttle performs an orbital back flipnearby.

?What we?veadded for this flight is a belly tile survey,? said shuttle flight director TonyCeccacci, adding that Atlantis astronauts will go nearly nine hours without abreak to cram the extended survey into an already tight schedule. ?Usually, ina station flight, you break that up with a meal, we don?t have that luxury withthe timeline.?

Missionspecialist Megan McArthur, Atlantis? roboticarm expert, will lead the inspection work, but the long job will be sharedamong the entire crew. The chore, she said, is not too different than thoseused on station-bound shuttle missions, just longer.