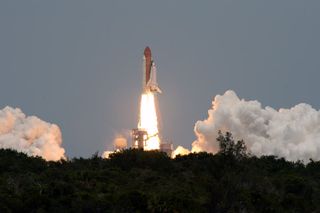 CAPECANAVERAL, Fla. - The space shuttle Atlantis blasted off into a Florida sky Monday to kick off a long-awaited mission to save the Hubble Space Telescope.

Atlantis thundered into space at 2:01 p.m. (1801 GMT) from a seaside launch pad here at NASA's Kennedy Space Center and began its risky mission to overhaul the 19-year-old Hubble for the last time.

It is the first time in seven years that astronauts are returning to Hubble. The mission,NASA?s last flight to the iconic space telescope, has been delayed since a part broke on the telescope last year and the servicing and upgrade plan had to be revised.

"At last our launch has come along, it's been a long time coming," Atlantis commander Scott Altman said just before liftoff. "Everyone has pulled together. We?retaking a little piece of all of us into space."

Atlantis is due to arrive at Hubble Wednesday. The shuttle experienced two minor glitches -a circuit breaker problem and a flaky sensor that sounded spurious alarms during liftoff - but neither had an impact on launch. If all goes well, Atlantis astronauts will upgrade Hubble to be more powerful and capable than ever before.

Atlantis' flight to Hubble is NASA?s fifth and final service call on the space telescope since its 1990 launch. NASA expected 30,000 people at its spaceport to watch today?s high-profile blast off.Thousands more were expected to watch elsewhere near the Cape.

No other mission has been more planned or more complicated, Hubble managers said.

The mission costs about $1.1 billion, and nearly $10 billion has been invested in Hubble since its conception.

The telescope was launched with a flawed mirror that gave Hubble blurry vision and led many to consider it "a national joke," said Ed Weiler, NASA's chief of science missions. Astronauts added corrective mirrors - essentially glasses -to fix Hubble in 1993 in what Weiler calls the "miracle in space mission."  Atlantis' mission is expected to extend Hubble's life through at least 2014, if not beyond, he added.

But there's added risk for the spaceflight.

A second space shuttle - the Endeavour orbiter - is on standby to fly a rescue mission if Atlantis is damaged beyond repair and strands its crew in orbit. Atlantis astronauts will not be able to reach the safe haven of the International Space Station if their shuttle is critically damaged because Hubble's position 350 miles (553 km) above Earth is higher and in a very different orbit than the 220-mile (354-km) high station.

That risk prompted NASA to cancel the Hubble flight in 2004 in the wake of the tragic Columbia accident that killed seven astronauts a year earlier. The mission was resurrected in 2006 after NASA resumed shuttle flights and successfully tested orbiter inspection and repair techniques.

Atlantis also has a slightly increased risk of damage from micrometeorites or space junk,while attached to Hubble, primarily due to a crash between two satellites above Earth earlier this year. The shuttle has a 1-in-229 chance of suffering a mortal blow from space debris, the space agency figures, but officials say the risk does not exceed NASA safety requirements.

"I like to think of everything we've done up to now as prologue," said David Leckrone, the Hubble program's senior scientist at NASA?s Goddard Space Flight Center in Greenbelt, Md.

The astronauts will run a five-spacewalk marathon to tune up Hubble. They'll replace the telescope's batteries and gyroscopes, as well as install two new cameras. Spacewalkers will also attempt to repair two others that are broken, but were never designed to be fixed in space.

Hubble scientists are hopeful, but there's no guarantee the fixes will work.

"I think this is going to be a nail-biter all the way up until we actually do the repair," said Grunsfeld, the mission's lead spacewalker.

Grunsfeld, an astrophysicist-turned-astronaut and self professed "Hubble hugger," is making his fifth spaceflight and third trip to Hubble.

"I really feel like Hubble is kind of a friend," Grunsfeld said before launch. "And I'm going to visit an old friend that I haven?t seen in a long time."

Atlantis is also carrying an IMAX 3D camera to document the Hubble servicing mission for a documentary slated for release in Spring 2010.

Monday's launch marked the 30th flight for Atlantis and NASA's 126th shuttle mission. It is NASA's last mission to Hubble and the final flight not bound for the International Space Station. The space agency plans to launch at least seven more shuttle missions to complete station construction before NASA retires its three-orbiter fleet in 2010.

Atlantis and its crew will spend about a week attached to Hubble and are due to land on May 22.