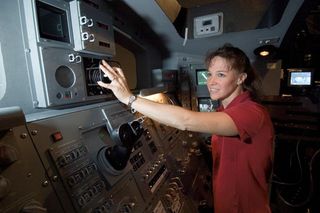 Judge Marc Lubet issued theorder today after the state petitioned the court for an evaluation of hersanity at the time she allegedlyattacked a romantic rival in 2007.

Nowak and Oefelein both were firedby NASA following the incident.

Nowak ? who was wearing a disguise as she followed Shipman throughout theairport and then out to a parking lot ? admitted to police to pepper-sprayingShipman after Shipman got into her car parked in the airport?s Blue Lot.

That admission, though, was part of her statement to police, which was thrownout because Lubet ruled that detective Chris Becton did not properly read Nowakher ?Miranda rights? to silence and an attorney.

Nowak also carried with her a duffel bag that has been described by former LosAngeles homicide detective Mark Fuhrman as a ?murder kit.? Inside were a BBpistol, a 4-inch hunting knife, a rubber mallet and surgical tubing. Areceipt found in the bag shows Nowak bought the gun, knife and mallet at aSports Authority store within days before the alleged attack.

Nowak told detectives she only wanted to talk with Shipman and had brought theitems as a way to force Shipman to sit with her.

Also in that court filing, Lykkebak reserved the right to use a temporaryinsanity defense.

At the time of the incident, Nowak had separated from her husband, Richard. Sheand her mother were not on speaking terms.

Astronaut Piers Sellers testified last year that Nowak had lost a considerableamount of weight between their July space mission and a December publicappearance.

Police statements indicated that she never spoke to her friends or peers abouther relationship with Oefelein, who divorced his wife in 2006.

Nowak must be evaluated by Dr. Wade Myers of Tampa and Dr. Gregory Prichard ofBristol, located southwest of Tallahassee. The doctors must submit theirwritten reports to the judge, the state attorney and Nowak?s attorney by July6.

That?s three years after Nowak worked in space aboardthe shuttle Discovery, helping to repair the International Space Stationand try out a new boom extension for repairs on the shuttle.

He allowed her to travel to any state except Alaska, California andPennsylvania.

Shipman is from Pennsylvania, and public records show she and Oefelein areliving together in Alaska. It was not immediately clear why the judge alsoexcluded California.

Calls to Shipman?s attorneys and the Orange County court?s chief of due processwere not returned.