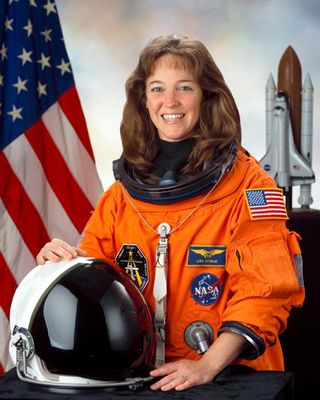 EXPERIENCE: Nowak received her commission from the U.S. Naval Academyin May 1985, and reported to flight school after six months of temporary dutyat Johnson Space Center.

Sheearned her wings as a Naval Flight Officer in June 1987, followed by ElectronicWarfare School at Corry Station, Florida, and initial A-7 training at Naval AirStation Lemoore, California.

Shewas assigned to Electronic Warfare Aggressor Squadron 34 at Point Mugu,California, where she flew EA-7L and ERA-3B aircraft, supporting the fleet insmall and large-scale exercises with jamming and missile profiles. Whileassigned to the squadron, she qualified as Mission Commander and EW Lead.

In1992, Nowak completed two years of graduate studies at Monterey, and beganworking at the Systems Engineering Test Directorate at Patuxent River,Maryland. In 1993, she was selected for both Aerospace Engineering Duty andU.S. Naval Test Pilot School.

Aftergraduation in June 1994, she stayed at Patuxent River working as an aircraftsystems project officer at the Air Combat Environment Test and EvaluationFacility and at Strike Aircraft Test Squadron, flying the F/A-18 and EA-6B. Nowakwas then assigned to the Naval Air Systems Command, working on acquisition ofnew systems for naval aircraft, when she was selected for the astronautprogram.

Nowakhas logged over 1,500 flight hours in more than 30 different aircraft.

NASA EXPERIENCE: After receiving her commission Nowak wasassigned temporary duty and from June to November 1985 she provided engineeringsupport for the JSC's Shuttle Training Aircraft Branch at Ellington, Texas.

Selectedby NASA in April 1996, Nowak reported to the Johnson Space Center in August1996. Having completed two years of training and evaluation, she becamequalified for flight assignment as a mission specialist. Initially assignedtechnical duties in the Astronaut Office Operations Planning Branch, she alsoserved in the Astronaut Office Robotics Branch and in the CAPCOM Branch,working in Mission Control as prime communicator with on-orbit crews. Nowakflew as a missionspecialist on STS-121 in 2006 and has logged almost 13 days in space.

SPACE FLIGHT EXPERIENCE: STS-121 (July 4-17, 2006), was a return-to-flighttest mission and assembly flight to the International SpaceStation.

Nowakwas responsible for operating the remote arm during scheduled EVAs. The crewalso performed maintenance on the space station and delivered and transferredmore than 28,000 pounds of supplies and equipment, and a new Expedition 13 crewmember to the station. The mission was accomplished in 306 hours, 37 minutesand 54 seconds.