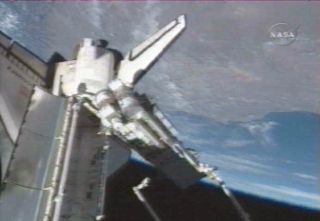 The new Starboard-6 truss is backdropped by a blue Earth as astronauts move it out of the shuttle Discovery's payload bay on March 18, 2009 during the STS-119 mission.
(Image: © NASA TV.)

The10-astronaut crew of the linkedshuttle and station gingerly plucked the nearly 16-ton addition for theorbiting lab out of Discovery?s payload bay in order to move into position forits final installation during a Thursday spacewalk

?We arelooking forward to today, getting that [truss] on its way,? said Discoveryastronaut Steve Swanson, who will help bolt down the massive girder intomorrow?s spacewalk.

Thestation?s new Starboard-6(S6) truss is a 45-foot (nearly 14-meter) long girder destined for theright side of the space station?s backbone-like main truss. It weighs 31,000pounds (14,061 kg) and is the final piece of the station?s 11-segment truss,which will span more than 300 feet (91 meters) from end-to-end when complete -longer than an American football field.

Twowing-like solar arrays, each 115 feet (35 meters) long, are folded away likeoversized maps in boxes on the end of the $298 million segment. Discoveryastronauts plan to installthe array-laden girder in Thursday?s spacewalk and unfurl them as early asFriday.

The solarwings are the fourth, and last, set of U.S. solar arrays for the space station?spower grid, which will generate enough electricity to power 42 average sizedhomes, NASA has said.

?It?s goingto give us all sorts of power to get us to do the kind of science the spacestation was designed for,? shuttle flight director Paul Dye told reporters lateTuesday.

Discovery?screw initially planned to unfurl the new solar wings on Sunday, but missionmanagers said they might move it up to Friday if the astronauts did not need toperform an extra heat shield inspection that day.

So far,images from a Tuesday photo survey revealed only one relatively minor dingedheat-resistant tile of note on Discovery?s underbelly and mission managersdecided to forgo the extra inspection. Mission Control radioed the news up theshuttle astronauts late Wednesday.

Astronautshad to take great care movingthe massive new girder, which required the use of robotic arms aboard thespace station and Discovery. At times, the 16-ton truss was just inches awayfrom the space shuttle, with little room for error.

?It canswing a little bit, so we?ve got to be really careful about that,? Discoveryastronaut John Phillips said in an interview before the shuttle?s Sundayevening launch. ?I wouldn?t say that we have to wiggle it out, but we?re notjust picking it straight up. It?s kind of a big deal.?

The orbitalextraction went smoothly, with Phillips and Discovery astronaut Sandra Magnususing the station?s Canadarm2 robotic arm to latch onto the starboard-sidetruss and ease it out of the shuttle?s cargo bay. They handed the segment offto Discovery?s robotic arm, and moved their own station appendage into positionto take back the massive girder and park it overnight.

?We want toshare the great adventure with you all,? Fincke said.

Dye saidevery move must be controlled perfectly to avoid breaking the robotic arms,losing control of the massive girder at the end of the outstretched limbs, orovertaxing the space station?s attitude control system.

?Obviouslywe want to make sure that we don?t bump into anything,? Dye said.

Discovery?sseven-astronaut crew is in the midst of a 13-day mission to deliver the newsolar arrays and swap out one member of the station?s Expedition 18 crew.Japanese astronaut Koichi Wakata, who launched aboard Discovery, replacedMagnus as a station flight engineer late Tuesday. Magnus will return homeaboard the shuttle when it lands on March 28.

NASA cut aday and a spacewalk from the mission, which was initially slated to includefour spacewalks and run 14 days, in order to complete the construction flightbefore the arrival of a previously scheduled Russian Soyuz flight bearing a newstation crew and an American space tourist.

?I thinkyou?re going to see non-stop action, especially on the station,? Dye said.