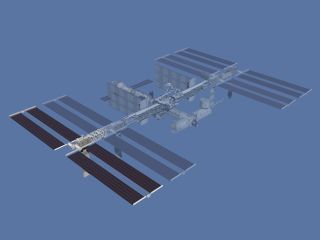 It?s movingday for the last major American-built piece of the International Space Station:a 16-ton girder tipped with a pair of folded solar wings.

Astronautsaboard the station will use the orbiting lab?s robotic arm to gently pluck the massivesegment out of the payload bay of NASA?s space shuttle Discovery, whichdelivered the $298 million addition when it arrivedat the outpost on Tuesday.

?We?relooking forward to [Tuesday] when we really get down to business and take ourpayload out of the bay,? shuttle commander Lee Archambault radioed down toMission Control last night.

Packedtight inside Discovery?s payload bay is theStarboard-6 (S6) truss, a 45-foot (nearly 14-meter) long girder destined tobe installed on the right side of the space station?s backbone-like main truss.It weighs 31,000 pounds (14,061 kg) and is the final piece of the station?s11-segement truss, which will span more than 300 feet (91 meters) from end-to-end - or longerthan an American football field - when complete.

Twowing-like solar arrays, each 115 feet (35 meters) long, are folded away likeoversized maps on the end of the new segment. Discovery astronauts planto install the arrays in a Thursday spacewalk and unfurl them later in the mission.They are the fourth, and last, set of U.S. solar arrays for the space station?spower grid, which will generate enough electricity to power 42 average sizedhomes, NASA has said.

?It?s goingto give us all sorts of power to get us to do the kind of science the spacestation was designed for,? shuttle flight director Paul Dye told reporters lateTuesday.

Before astronautscan plug in the new solar wings, they have to transfer them out of Discovery?spayload bay in an orbital dance that will require the use of robotic armsaboard both the space station and shuttle. At times, the 16-ton truss will be justinches away from the space shuttle, with little room for error.

?We?ve gotto be really careful about it,? Discovery astronaut John Phillips said in an interviewbefore the shuttle?s Sundayevening launch. ?A few inches off target side-to-side ? and we would hit something.?

Phillipsand Discovery astronaut Sandra Magnus will use the station?s Canadarm2 roboticarm to latch onto the starboard-side truss, then ease it out of the shuttle?scargo bay. They?ll hand the segment off to Discovery?s robotic arm, and thenmove their own station appendage into position to take back the massive girderand park it overnight.

?It?s goingto be a very full robotics day,? Dye said. ?I think it?s going to be a veryfull day from start to finish.?

Dye saidevery move must be controlled perfectly to avoid breaking the robotic arms, losingcontrol of the massive girder at the end of the outstretched limbs, orovertaxing the space station?s attitude control system.

?Obviouslywe want to make sure that we don?t bump into anything,? Dye said.

Discovery?sseven-astronaut crew is in the midst of a 13-day mission to deliver the newsolar arrays and swap out one member of the station?s Expedition 18 crew.Japanese astronaut Koichi Wakata, who launched aboard Discovery, replacedMagnus as a station flight engineer late Tuesday. Magnus will return homeaboard the shuttle when it lands on March 28.

NASA cut aday and a spacewalk from the mission, which was initially slated to includefour spacewalks and run 14 days, in order to complete the construction flightbefore the arrival of a previously scheduled Russian Soyuz flight bearing a newstation crew and an American space tourist.

Dye toldreporters that mission managers continue to rework the mission plan forDiscovery?s crew, including moving tasks from the canceled spacewalk into the flight?sthird excursion.

?I thinkyou?re going to see non-stop action, especially on the station,? Dye said.