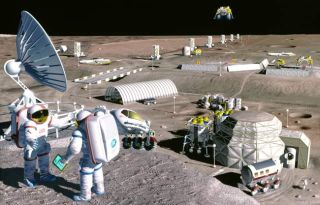 We?redestined to go to the stars. That?s the assumption we?ve been making for acentury, and I daresay most readers believe this as surely as they believewe?ll eventually cure dandruff.

Our anticipationof an interstellar destiny is not merely the consequence of too manycouch-hours spent watching Spandex-suited astronauts in StarTrek, Star Wars, or Futurama. It?s been a subtext of ourspace program. You might recall a low-grade, 1960 biopic about Wernher von Braunentitled I Aim at the Stars. Or perhaps you know the sunny motto of theNational Space Society: ?ad astra? (?to the stars?). Boldly sending our descendantsinto the galaxy?s stellar realms seems as inevitable as teen sex.

I like theidea of becominga spacefaring society. It?s just a matter of how far we?ll fare. Yes, we?llcolonize our cosmic backyard; after all, if our species has not spread beyondEarth within a century, then we?re headed for eternal internal conflict and armageddon@home.In the words of rocket pioneer Konstantin Tsiolkovsky, humans can?t stay in thecradle forever.

I trustwe?ll soon be landing people on Mars, and eventually the satellites of theouter planets. I anticipate the construction of space habitats on the moon, theasteroids, and in orbit around Earth.

But colonizingthe vicinities of other stars is enormously harder than settling the solarsystem. Our fastest rockets can take us to Neptune in less than a decade - along ride, but not inconceivable.? On the other hand, a tripto the closest star system, Alpha Centauri, would take 75,000 years.

Since ourlifetimes are typically a century or less, practical travel to the starsrequires relativistic velocities. Sending a 100-ton habitat, stuffed with asmall crew, to Alpha Centauri at a speed that will deliver them before they turnup their toes requires as much energy as the United States consumes in a year. Atstandard utility rates, that will cost you about $3 trillion, just for the fuel.

Now this isa familiar discourse, and the usual rejoinder is to appeal to the inevitabledevelopment of faster rockets. We?ll still go to the stars; we just need bettertransport.

But permitme to point out something both relevant and important: our remote sensingtechnology is improving much faster than our rocket technology. And that is agame-changing circumstance.

Let?s lookat some numbers. Von Braun?s V-2 rockets crossed the English Channel at 1 mileper second. NASA?s New Horizons mission to Pluto - the fastestspacecraft ever launched - is headed to this erstwhile planet at 10 milesper second. That?s an order-of-magnitude improvement after 70 years.

Nowconsider one component of our remote sensing capabilities - our ability to?see? what we?re exploring. The Mariner 4 spacecraft - the first to snap decentphotos of Mars - was fitted with a monochrome TV camera having a resolution of40 thousand pixels. In the summer of 1965, it sailed by the red planet whileimaging craters as small as a few miles across.

Today, theHiRISE camera on NASA?sMars Reconnaissance Orbiter boasts a resolution of 200 million pixels (and shootsin color). It can discern items on the surface as small as a horse.?

In otherwords, in seven decades our rockets sped up by a factor of ten, but in littlemore than half that time our cameras improved by a factor of five thousand.There?s no comparison: probe technology is marching to the beat of a fasterdrummer.

Probes havealways offered the advantage of lower cost and minimal risk. For interstellartravel, their smaller size makes them especially practical. For the same energybill, you could propel a one-ton reconnaissance craft to another star inone-tenth the time of sending even a small clutch of humans.?

Now youmight argue that human exploration is qualitatively different than sending mechanicalproxies. We humans want to experience the frontier, not just watch itcome up on our computer screen. We want to smell it, feel it, and look around.

OK, butwhat if we could send back all those sensations with a fidelity as good asbeing there?? That?s becoming more and more practical. The bandwidth of asingle human eye, recently measured at the University of Pennsylvania medicalschool, is roughly 2 megabytes per second.? The bandwidth of your ears is muchsmaller - no more than a few hundred kilobytes per second.? Your fingertips andother parts of your anatomy require even less of a data pipe.

In otherwords, we could send back everything a human could sense with atelemetry channel of, say, 10 megabytes per second. This is roughly the datarate you?ll soon be getting off a blue-ray disk.? It?s not trivial to send dataat this rate from star to star, but it?s a lot easier than sending ourselves.

To spreadour descendants among the nearby worlds of our solar system is more than ourdestiny: it?s an imperative for our future. But galactic exploration will bedifferent: that?s something we?ll do from the comfort of our own homes. And wewon?t need the Spandex.