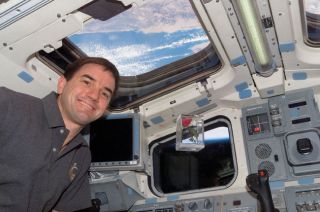 A "Tournament of Roses" rose, seen here with astronaut Rex Walheim, floated in Earth orbit in February 2008 before riding on a float in the 2009 Rose Parade.
(Image: © NASA )

On NewYear's Day in Pasadena, Calif., among the hundreds of thousands of rosescovering nearly 50 flower-formed floats in the Tournament of Roses Parade and amidthe more than 12,000 roses covering the Bayer Advanced "Wizard ofOz"-themed float, will be the only rose among them all that truly flew"somewhere over the rainbow."

The two-toned pink rose, appropriately of the variety that was named after theparade ("Tournament of Roses"), circled the Earth more than 200 timesin February 2008, aboard space shuttle Atlantis. How the rose came to be there,and how it is now to be a part of the parade, came as a result of the author of"Roses For Dummies" working together with an astronaut, who alsohappened to be his younger brother.

"I have had a long interest in roses and have written a number of books onroses," explained Lance Walheim in an interviewwith collectSPACE.com. "Everybody was always kidding me, whydon't you send up a rose with Rex? The challenges of doing that, well, mystaged answer was, 'Rex can't even grow a rose in his own backyard, how is hegoing to grow one in space?'"

The idea however appealed to Lance, and to Rex, who at the time was preparingto embark on his second mission.

"I thought that would be a great idea," shared the younger Walheim."Since I am from California, and the Rose Parade is here in California,and he is a rose expert, it seemed like a neat idea to combine his career withmy career."

As both brothers recalled, the problem was how to do it.

"I'm also the Bayer Advanced garden expert and we have a float in the RoseParade every year and I thought, we could send him with a dried rose and thenput it on the Bayer Advanced float. And that would be kind of fun as apromotion for the parade and also for NASA," explained Lance. "Thefirst thing we had to do was decide how we'd dry a rose."

It turns out there were a number of ways to prepare the rose, from baking it ina kiln to putting it in a silica gel and then microwaving it. Freeze drying,which is a method NASA uses to preservethe astronauts' food, was not an option, however.

"Given the time constraints we had, I think trying to figure out a way offreeze drying it would have taken a lot of experimentation," shared Rex."We also did not want to bother NASA with it."

Ultimately, the simplest method offered the best option. After picking severaldozen of the "Tournament of Roses" roses from behind Wrigley Mansion,the headquarters of the parade, and shipping several to a kiln, Lance arrivedat the answer.

"It turned out that just hanging them upside down gave us the bestresults," he said of the air drying process.

The next challenge for the brothers was how to package the rose for itsspaceflight. NASA provides its astronauts with a few dedicated areas to carrypersonal items. They can choose topack items in the Official Flight Kit (OFK), which remains stowed forthe length of the mission, or take items in their Personal Preference Kits(PPKs) and special Flight Data Files (FDFs) for access during flight.

For Rex and Lance, the choice was between protecting the flower from accidentaldamage and having the chance to photograph the rose while in space. Theirsolution was to fly two roses.

One of the dried flowers would be wrapped by NASA and stowed inside theshuttle's crew cabin, where Rex nor any of his STS-122 crewmates could get toit. The other was to fly with the FDF together with a bible and a pennant forUniversity of California, Berkeley, Rex's and Lance's alma mater.

As the latter rose would be available to Rex during the 13-day mission to theInternational Space Station (ISS), he needed a way to protect it.

"Again, we're doing this all on the fly and we are thinking, 'How are wegoing to package this thing so it doesn't get shaken to pieces on ascent?'. Wenever came up with a really good idea, but what we did was we put it in alittle plastic box and then handed it off to the folks at the Cape to be packedon the shuttle. We never really braced it, so we were not really sure what wasgoing to happen to it," described Rex.

Originally, Atlantis - with Rex and the rose aboard - was scheduled to launchin early December 2007, which then would allow Lance enough time post-flight toget the rose into the 2008 Tournament of Roses Parade on January 1. BayerAdvanced put out a press release announcing the 'space rose' was to be on theirfloat. The shuttle however, experienced problems with its fuel level sensors,leading to NASA delaying the mission.

Two months later, at 2:45 p.m. EST on February 7, 2008, the spaceshuttle lifted off from Kennedy Space Center in Florida. The bumpyride to orbit took about eight minutes.

Continuereading at collectSPACE.com to learn how the 'space rose'went from the floating in orbit to a float in the New Year's Parade and watchfor the rose in the 120th Tournament of Roses Parade on the Bayer Advanced"Garden of Oz" float on  January 1, 2009.