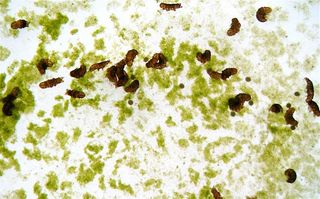 Astrobiologists work at the cutting edgeof scientific research, investigating the possibility of life elsewhere in ouruniverse. They are, however, plagued by a single, potentially critical problem:a lack of samples. Studying alien organisms is naturally difficult when nonehave been discovered.

Some scientists have taken a novelapproach to circumventing this issue. Life on Earth is abundant, and often veryhardy. Extremophile creatures exist in places we would consider asexceptionally hostile, such as deepin the ocean floor or areas where even a drop ofwater is almost impossible to find. Similarly, some of the potential places forlife elsewhere in our solar system, such as the planet Mars, Jupiter's moonEuropa, or Saturn's moon Titan, have conditions that are viewed as extremelyhostile but still potentially survivable. So extremophile organisms are studiedin lieu of genuine extraterrestrial samples, to see if they could survive therigors of life beyond the Earth.

Dr. Daiki Horikawa from NASA Ames Research Center has been examining strange creatures called tardigrades for the lastseven years. He explains, "tardigrades are small invertebrate animals,0.004 to 0.04 inches (0.1 to 1.0 mm) in body length, that live in terrestrialmosses, soil, or lichens. They also inhabit ocean and polar regions."Often known by their nickname, "water bears," studies of these bizarrecreatures have surprised scientists.

Recent research has shown that water bears can survivethe dangerous conditions of space. Previously, the only organisms that havebeen exposed to the radiation and vacuum of space and lived to tell the taleare certain types of bacteria and lichen. That simple animals like tardigradesalso can survive gives morecredence to the theory of panspermia, whichclaims that organisms could move from world to world after travelling thoughspace.

Perhaps the most interesting feature oftardigrades is their ability to enter a suspended animation-like state whenthey cannot find enough water. In this kind of survival mode they become veryresistant to harsh environments. When they encounter water they awaken andbecome active again.

Horikawa realised that if he wanted toproduce worthwhile, reproducible studies, he would have to raise samples ofwater bears in laboratory conditions. Those collected from their natural habitatcan be quite different to one another because of climate variations,nutritional differences and other environmental considerations. So Horikawaraised a collection on agar plates with green algae for food. Althoughlabor-intensive, this produced uniform water bears which were then separatedinto groups and exposed to various stresses to see how tough they really are.

A barrage of tests

First they were heated up to sizzling temperaturesof 194 F (90 C). Then a group was frozen at -321 F (-196 C). The next batch was given adose of radiation similar to what they would receive in space — around 4,000times stronger than that which would make humans ill. The last selection was coveredin a dissolving chemical (99.8% acetonitrile, a chemical which may be presentin Titan's atmosphere).

The results, published in a recent issueof the journal Astrobiology, were that water bears in their suspendedanimation state survived everything that was thrown at them. Active creatures wereless fortunate, but some did tolerate the extreme conditions. Now their tolerances tospecific stresses are known, plans are underway to expose them to many harshenvironments simultaneously.

If extraterrestrial life is as tough andresilient as water bears, then other worlds could be inhabited. "It's apossibility that water bear-like creatures could survive and thrive on otherplanets despite harsh environments," says Horiwaka. "Judging fromdata of the planets in our solar system, there could even be some in theirsuspended state on Mars." There is a chance that Earth-based water bearscould be transported to other worlds via meteorite impacts, but more researchis required before this is known for sure.

Horikawa plans on continuing his research,particularly looking at the ability of water bears to repair DNA after beingexposed to high levels of radiation. As he says, "the most fascinatingfeature of tardigrades for me is their ability to survive complete dehydration ofthe body and high tolerance to radiation exposure which must cause critical DNAdamages."

Horikawa's method of rearing water bears in thelaboratory could lead to many more studies of these amazing animals, and mayhelp astrobiologists in their search for genuine extraterrestrial life.

Knowing the survival tricks of water bears also couldone day be a key component in enabling the human exploration of the universe.