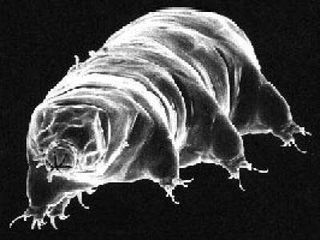 A tiny, eight-legged critter that can suspend all biological activity in extreme environments survived a journey to space that would have instantly killed any human and most other life forms.

In the first test of its kind, researchers exposed the hardy segmented creatures, called "water bears," to the open and harsh vacuum of space, with all its deadly radiation, on a spacecraft in low-Earth orbit. Many of them survived.

The water bears, known formally as tardigrades, have an ability similar to brine shrimp (also known as Sea Monkeys), which are familiar to many children for their ability to come to life after being sent to homes by mail-order. Tardigrades are speck-sized things, less than 1.5 millimeters long. They live on wet lichens and mosses, but when their environment dries out, they just wait for a return of water. They also resist heat, cold and radiation.

The radiation resistance was most surprising to scientists.

The tardigrades were aboard the FOTON-M3 spacecraft launched by the European Space Agency (ESA) in September 2007 and were exposed to open space conditions, the scientists reported today. They were examined upon return to Earth.

Most survived exposure to the vacuum and cosmic rays, and some even survived the exposure to the deadly levels of solar UV radiation, which are more than 1,000 times higher than on the surface of the Earth.

The survivors "could reproduce fine after their space trip," according to a statement released today by Cell Press, the journal that published results of the test.

How the post-flight tardigrades could do it "remains a mystery," the researchers write.

When dehydrated, water bears enter into a dormant state in which the body contracts and metabolism ceases. In this death-like dormant state, water bears manage to maintain the structures in their cells until water is available and they can be active again.

UV rays consist of high-energy light particles that cause severe damage to living tissue, as is evident when you get a sunburn. But more so, they can also damage cells' genetic material, causing skin cancer, for example. The radiation, in wide-open space, also is thought to be sterilizing.

The work was led by K. Ingemar Jonsson of Kristianstad University in Sweden.

Jonsson suspects that even the water bears that got through the space trip without any trouble may in fact have incurred DNA damage, but that the animals managed to repair this damage. Figuring out how they did that could inform medical research.

"One problem with radiation therapy in treating cancer today is that healthy cells are also harmed," he said. "If we can document and show that there are special molecules involved in DNA repair in multicellular animals like tardigrades, we might be able to further the development of radiation therapy."

Editor's Note: This story was updated to correct the number of legs tardigrades have. It's eight, not six.