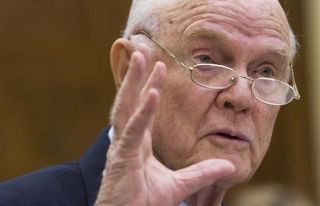 WASHINGTON —Former U.S. Sen. John Glenn (D-Ohio), the first American to orbit the Earth,criticized President George W. Bush for directing NASA to set a course for the Moonand not following through with the promised funding.

"Ifavored the [Vision for Space Exploration] because I assumed it was in additionto, not in place of, existing programs. I assumed that money requests wouldfollow," Glenn told the House Science and Technology Committee during a Wednesdayhearing. "Instead what we got were cuts in other research to try to payfor this program and it wound up in my view one of the biggest unfundedmandates that we have in all of government history."

Glenn, a NASA astronaut who spent 25 years inthe Senate before retiring shortly after his 1998 flight aboard the space shuttleDiscovery — hissecond spaceflight — appeared before the committee to testify about thechallenges facing the U.S. space agency celebrating its 50th anniversary thisyear.

Glenncriticized the Bush administration for rolling out the Visionfor Space Exploration in January 2004 without much external consultationand said concerns among scientists and others about financing the program havebeen borne out.

"Congressionalconsent and consultation and international consultation was certainly lackingin this because there was consternation in some of those communities when thiswas announced," Glenn said. "Not only would there be no increase infunding but ongoing research at that time was gutted by $1.2 billion over afive-year period."

The Bushadministration sought and received a nearly 6 percent increase for NASA for2005, the first budget Congress enacted after the Vision for Space Explorationwas unveiled. Subsequent NASA requests have been less generous, with the WhiteHouse failing in some years to request sufficient funding to keep pace withinflation.

NASA inresponse has capped spending on science and stretched out the development ofthe Orion Crew Exploration Vehicle and Ares I rocket, the vehicles it isbuilding to replacethe space shuttle. NASA does not expect to field Orion and Ares any soonerthan March 2015 — nearly five years after it expects to conduct its finalspace shuttle mission. NASA's plan for keeping the International Space Stationoccupied during that gap relies on buying Soyuz rides from Russia. The agencyalready has signed contracts with Russia totaling more than $700 million forcrew-carrying Soyuz and cargo-hauling Progress vehicles and currently is askingCongress for permission to negotiate additional Soyuz flights beyond 2011.

"Inever thought I would see the day when the world's richest, most powerful, mostaccomplished spacefaring nation would have to buy tickets from Russia to get upto our station," Glenn said. "I think that's a bummer."

Glennproposed giving NASA an additional $2.8 billion to $3 billion annually toenable it to keep flying the space shuttle until Orion and Ares arefielded. Glenn has floated such a proposal before, as have Rep. Dave Weldon(R-Fla.) and Sen. Bill Nelson (D-Fla.), both of who are gravely concerned aboutthe estimated 3,000 to 6,000 jobs that could be lost at Kennedy Space Center inFlorida during a five-year gap in U.S. human space flight activity.

"Wewill have $100 billion invested in this when the station is completed,"Glenn said. "If we put 2.8 to 3 billion per year additional into theprogram now we could keep the shuttles, keep the research, and keep the workforce."