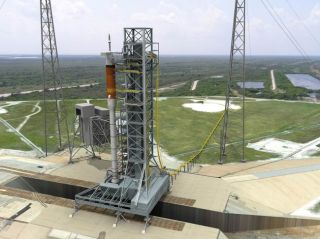 NASA is expectingdelays for the first tests of the rocket that will replace its aging spaceshuttles after they retire in 2010, agency officials said Thursday.

Anticipateddelays for NASA?s fall shuttle mission to the Hubble Space Telescope may pushback the first test of the agency?s newAres I rocket next year by up to a month since both flights use the same launchpad and other material, said Jeff Hanley, the agency?s Constellation programmanager.

NASAinitially planned to launch a test version of its two-stage Ares I rocketaround April 15, 2009, but the vital flight may now slip to late May of that year in aripple of delays related to the Hubbleservicing mission.

?We?ll be usingone of the shuttle launch platforms, and the handover of that is modulated byhow soon the shuttle program can get the Hubble mission successfully launched,? Hanley told reporters. NASA is still on target, however, to begin the first manned flights of Orion spacecraft atop their Ares I boosters by no later than March 2015, he added.

The fall Hubblemission and the 2009 Ares I-X test will use the same seaside launch pad at NASA?sKennedy Space Center in Cape Canaveral, Fla. The space shuttle Atlantis isexpected to launch toward Hubble in late September or early October of this yearfrom Pad 39A, but a second shuttle will also be prepared at Pad 39B ? thelaunch site for Ares I-X ? to serve as a rescue vehicle in an emergency.

?We?relooking at what can be done to absorb any scheduled slip in the handover ofshuttle assets, specifically the mobile launcher, to keep that from impactingour launch date next year,? Hanley said.

Meanwhile,NASA is also facing delays with the first test of the launch abort escapesystem designed to rip an Orion crew capsule free of its Ares I booster in theevent of an emergency during liftoff.

The firsttest, Pad Abort-1, was initially targeted for Sept. 23 of this year at theWhite Sands Space Harbor in White Sands, N.M. But hardware delivery delays promptedNASA to reschedule the test for Dec. 11.

?We?ll continueto be vigilant and looking at ways to scrub mass,? Geyer said.

The debate onwhether to planfor Orion landings on firm ground or in the water is leaning toward a nominalwater return, with engineers preserving the option for a land landing if required,Hanley added.

NASA?sOrion spacecraft and their Ares I boosters are designed to ferry astronauts tothe International Space Station (ISS) once the agency?s three remaining shuttlesretire in 2010. While the agency is targeting March 2015 for its firstoperational manned launch, Ares and Orion engineers hope to ready theirvehicles in time to begin crewed operations by September 2013.

Aheavy-lift Ares V rocket is also under development to support NASA?s plan tosend manned Orion spacecraft and their Altairlunar landers to the moon by 2020.