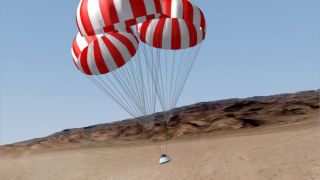 This artist's illustration depicts the Orion crew capsule descending toward a landing on solid ground after a spaceflight.
(Image: © NASA.)

NASAexpects to decide sometime in 2008 whether the Orion Crew Exploration Vehicle,the agency?s space shuttle replacement, will typically splash down off the California coast or touch down on dry land when it returns from space.

Time is ofthe essence because the choice will determine a number of other designdecisions that need to be made between now and a scheduled review in September,NASA officials say.

It is adecision NASA officials have likened to choosing the shape of the spaceshuttle?s wings or the International Space Station?s orbit. As might beexpected in cases where the long-term consequences of a decision are not alwaysobvious, NASA is not of one mind on the Orion landing question.

?The simpleanswer is we have not picked a landing mode for Orion yet. Both options arestill on the table as we head into the coming year,? Rick Gilbrech, NASA?sassociate administrator for exploration systems told reporters Dec. 10.

For thebetter part of the past two years, NASA had been leaning heavily toward drylandings for Orion. That approach was endorsed in the landmark ExplorationSystems Architecture Study (ESAS) that NASA Administrator Mike Griffincommissioned upon his arrival in 2005 to kick the agency?s return-to-the-Moonplanning into high gear.

The ESASembraced dry landings in the Western United States ?for ease and minimal costof recovery, post-landing safety and reusability of the spacecraft.? While theESAS planners wanted Orion to be capable of making water landings if necessary,they reasoned that ?a vehicle designed for a primary land-landing mode can moreeasily be made into a primary water lander than the reverse situation.?

But by thetime NASA gave permission this fall to begin Orion?s detailed preliminarydesign phase, the assumption was that Orion would routinely land in water withonly a contingency capability to touch down on land.

JeffHanley, program manager of NASA?s Constellation Program, which includes Orionand other hardware needed to return astronauts to the moon, said the team hasmade a strong case that landing in water offers safety and performanceadvantages over land landings.

?There area couple of aspects that pop out to us,? he told reporters during the Dec. 10media roundtable. ?Looking at the landing event itself -- the event of actuallytouching down -- water comes out to be preferable. And that kind of makessense.

?Now whenyou add in the risk of what happens after landing, if you?ve nominally landedon land in a place you intended to land, then obviously getting out of thecapsule is a lot easier and a lot safer,? Hanley continued. But from a broadersafety perspective, water landing still came out the winner because the landingevent itself, he said, is ?the riskiest part of doing crew return.?

?Everypound you send toward the moon is a precious thing ? from an efficiency pointof view -- a performance point of view -- carrying 1,500 pounds (680 kilograms)of landing bags to the moon and back when I have a perfectly viable mode oflanding in the water near a U.S. coastal site didn?t seem like a good trade interms of its performance,? Hanley said.

For anOrion team under the gun to shed weight from its spacecraft design, the 680kilograms of airbags the vehicle would have to carry to enable routine landlandings proved a fat target.

?That?s apretty big amount in terms of the mass challenge that the Orion team was facinglast summer,? Hanley said. ?That 1,500 pounds represents quite a bit of theamount that they were trying to burn down.?

Land-landingadvocates inside NASA argue that the added weight is worth it if it means thedifference between using each Orion capsule up to 10 times instead of throwingit away after every mission. By treating Orion as expendable, they argue, NASAcould find itself spending hundreds of millions of dollars annually keepingproduction lines open. That money, they say, would be better spent establishinga robustpresence on the moon.

?It?s thedifference between going to the moon to stay and making one two-week trip ayear,? one such advocate said.

Gilbrechsaid the Constellation Program is being asked to assess the long-term costimplications of a water- versus a land-landing scheme. A key factor in theanalysis is the cost of maintaining a permanent Orion production capabilityversus building enough vehicles and spares to last 30 years and then shuttingdown the assembly lines.

?That?s oneof the knobs we?ve asked them to go back and turn is keeping the productionline open longer depending on how reusable you make the spacecraft,? Gilbrechsaid. ?That?s one of the things we want to hone in on in some of these trades.?

Hanley saidthe analysis will test the assumption that touching down on dry land offers thegreatest reusability and the lowest cost. ?Landing on land is not a panacea inany sense of the imagination,? he said. ?There have been a lot of assumptionsmade assuming that landing on land is going to be better. There are a lot ofpeople in the technical community who don?t buy into that.?

For example,NASA still does not fully understand the loads Orion would experience in a landlanding versus a water landing, Hanley said. And while a lengthy stay in saltwater certainly is not good for anything as sensitive as a spacecraft, advancesin navigation and positioning since the Apollo program bode well for rapidrecovery efforts.

?In anominal water landing, how long does the capsule stay in the water? If we havea fairly rapid recovery, where the recovery ship would be pulling thespacecraft out of the water very, very quickly -- assuming with our targetedlanding capability we are going to land very close to the recovery ship -- thenmaybe most of the spacecraft is reusable in a water landing case,? Hanley said.?We don?t know.?

NASA haslearned a thing or two about recoveryat sea since Apollo, Hanley said.

?Thephilosophy the Orion team has adopted is to have a targeted landing zone offthe coast of California with one or two recovery vessels,? Hanley said. ?We?vegot a couple of recovery vessels for the [space shuttle solid-rocket boosters]today off the coast of Florida, so that is not an infrastructure cost we don?tunderstand at this point, since we have been in that mode for 30 years with thespace shuttle.?

While aquick recovery would bode well for reusing a capsule that splashed down in theocean, Hanley said he still has questions about just how much reusability isdesirable from a cost perspective.

?Thelife-cycle cost trade between the two is not at all clear,? he said. ?We have alot of battle scars, if you will, from re-using space shuttle. We need to goreally interrogate that.?

WithOrion?s preliminary design review slated for September, Hanley said it is necessaryto lock down something as basic as the landing mode so that the vehicle?svarious design teams can do their job.

JamesReuther, project manager for advanced development of Orion?s heat shield at NASA Ames Research Center at Moffett Field, Calif., agreed. He said the water versus landquestion does not make much difference for Orion?s ablative main heat shieldsince it is a single-use system either way. But he said it does make adifference for Orion?s back shell, whose current design relies on spaceshuttle-heritage ceramic tiles for thermal protection.

?There arethose in the community who say if you stick a tile in water, forget about it.You are never going to reuse it,? he said. Others, he said, simply do not thinkthe tiles are worth saving under any circumstances and favor treating them asexpendables by mounting them on easy-to-change detachable panels instead ofdirectly onto the capsule?s rigid hull.

Reuthersaid thermal protection system designers also are expecting a decision from theprogram in the coming weeks on whether Orion will jettison its main heat shieldbefore landing or keep it in place through touchdown.

For a drylanding, the assumption has been that Orion would jettison its heat shield inorder to deploy the airbags and retro-rockets necessary for a soft touchdown.But if land landing is only going to be used in the event of a launch-abortsituation, Reuther said, big airbags and retro rockets might not be necessary.

Smallairbags probably still would require Orion to jettison its heat shield. But ifOrion engineers decide that parachutes and retro-rockets alone can guarantee asafe touchdown in the event of an abort situation that shoots the capsule backover land, Reuther said it is possible to design a heat shield where the retrorockets would be able to blow through the shielding and bring the crew down toa safe, if somewhat rough, landing.

What isimportant at this stage of the game, Reuther said, is that the program freezesome design assumptions so that subsystem teams can continue to move forward.

Hanley saidthat while Constellation is assuming a water landing for now, it has not closedthe door on land landing.

?By thetime we get done looking at what that minimal capability would be to land onland safely and have the crew walk away, we will see what the design looks likethen,? Hanley said. ?And if the design is in fact robust enough that we couldin fact return to having nominal land landing then we will make that choice atthat time. We are allowing that to now fight its way back in.?

As for thecost estimates the Constellation Program has come up with for reuse versusexpendable, and land versus water, Hanley declined to comment.

?As far asthe specific cost numbers, I?m not going to share them because I don?t believethem,? he said.