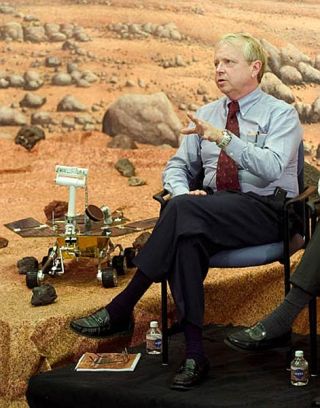 Weilerreturned on anacting basis to the position he had held from 1998-2004 following theabrupt March 25 resignation of Alan Stern after one year on the job. At thetime of Stern's resignation, Weiler was director of NASA's Goddard Space FlightCenter in Greenbelt, Md.

"I'mvery pleased to have Ed officially accept a more long-term position as sciencechief. His leadership style and 26 years of headquarters experience will bevital to the success of upcoming science activities and missions," NASAAdministrator Mike Griffin said in a prepared statement.

Weilerjoined NASA in 1978 as a staff scientist and was promoted to chief of theagency's ultraviolet/visible and gravitational astrophysics division in 1979.He also served as the chief scientist for the HubbleSpace Telescope from 1979 until 1998, when he then was promoted toassociate administrator for the agency's Space Science Enterprise — now theScience Mission Directorate. He was appointed director of Goddard in August2004.

Weiler willlead the $5 billion Science Mission Directorate amid criticism of decliningMars exploration spending plans and costoverruns on the Mars Science Laboratory, a large rover slated for launch in2009. Colleagues said political and bureaucratic demands of the job, as well toopposition to his plans for dealing with the rover cost growth, prompted Sternto resign.

Weiler saidin a recentinterview that he is not afraid to cancel programs that bust their budgets.He also said back-to-back Mars mission failures in 1998 — under his watch asscience chief — taught him that cost controls should be balanced with goodengineering.