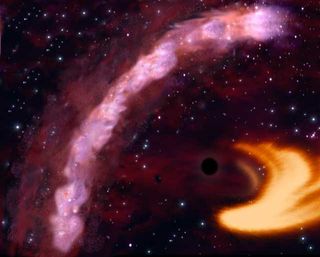 Artist's rendering of the light echo of a high-energy flash from a black hole. When a star is disrupted by a black hole in the nucleus of a galaxy, its debris is inevitably attracted and absorbed by the black hole. This sudden increase in the accretion rate causes an abrupt burst of ultraviolet and X-ray light because the gas from the disrupted star becomes very hot. As the high-energy radiation travels through the core of the galaxy it illuminates surrounding matter and so makes it possible to probe regions of the galaxy that would otherwise be unobservable.
(Image: © MPE/ESA)

In a distant galaxy, a star orbiting a massive central black hole strays too close to the insatiable giant and is torn apart. But before it can be devoured, the star lets out one last scream in a flare of light that slowly echoes across the galaxy. Astronomers on Earth pick up this faint call and use it to map the nucleus of the galaxy from which it emanated.

This scenario is no bit of science fiction — a team of astronomers discovered one of these rare and dramatic events while combing through the Sloan Digital Sky Survey last December. Their observations are detailed in the May issue of Astrophysical Journal Letters.

The team is still monitoring the "light echo," and for the first time, one of these events can be observed in great detail, allowing astronomers "to probe different regions of the galaxy," said study leader Stefanie Komossa of the Max Planck Institute for extraterrestrial Physics.

The light echo currently coursing through galaxy SDSSJ0952+2143 likely originated as in the scenario above, with the following details: One of the stars orbiting the galaxy's central black hole likely strayed off course (perhaps after being nudged into "a fatal orbit," as Komossa called it, after interacting with another star). Eventually the pull of the black hole would rip the star apart, but before the stellar material was pulled into the accretion disk, it emitted a burst of high-energy radiation.

Komossa likens the sudden emission of light to throwing tinder into the smoldering embers of a campfire.

"Imagine a campfire which is almost extinguished so there is not much light around, and so you cannot recognize your surroundings. In a sense, that is like the core of a normal galaxy," she told SPACE.com.

Just as the campfire would illuminate the people sitting around it and the trees in the background, this burst of radiation illuminates the regions of the galaxy as it hits them, only the immensity of the galaxy creates a time-delay effect.

"The dimensions of a galaxy are much bigger, so the light needs a lot of time to travel through the core of the galaxy," Komossa explained. "And whenever [the light] reaches a certain region, the gas [in that region] will temporarily shine up brightly and then will fade away again."

Galactic nuclei are normally hard to resolve because a permanent accretion disk of dust and gas around the black hole illuminates everything simultaneously.

"But this light echo effect makes different components shine up temporarily, but … at different times. That is an exciting way to do some mapping of the components of the nucleus," Komossa said.

Different parts of the galaxy, such as the molecular torus (a swirling structure of gas and dust that shrouds the black hole and its accretion disk), have a "fingerprint" of atoms in their gases, and by examining the strong change the light echo creates in these fingerprints, the astronomers can tell what part of the galaxy the echo is traveling through. Then by timing how long it takes the echo to traverse the region, the scientists can estimate its dimensions.

The light echo that Komossa and her team are tracking is thought to have started in 2004, when the telescope of Sloan Digital Sky Survey routinely imaged and took spectral readings of the radiation in this and thousands of other galaxies.