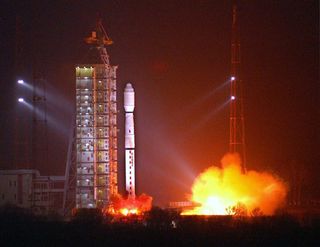 The rocketlaunched into space from the Taiyun Satellite Launch Center in the ShanxiProvince at 6:48 a.m. local Beijing Time, Xinhua reported. The 5,952-pound(2,700-kilogram) satellite will be used to scan available land resources,estimate crop yields and assist in disaster management, the news agency added.

Monday'ssuccessful launch marked China's second space shot in less than three weeksfollowing the Oct. 24 liftoff of its Chang'elunar orbiter. The moon probe subsequently reached its final lunar orbitlast week and is expected to spend about one year observing the lunar surface.

China isthe third nation, after Russia and the U.S., to independently build and launchastronaut-carrying spacecraft into Earth orbit. Last month, Chinese spaceofficials formally announced plans to develop the Long March 5 family ofrockets, consisting of larger boosters capable of launching heavier payloadsinto orbit, to lift off from a new spaceport to be built on the country'sHainan Island.

Accordingto state news reports, the first Long March 5 rocket will debut until 2013,though China is preparing for its third manned spaceflight. The three-astronautmission is slatedto launch in 2008 and may include China's first spacewalk.

Chinalaunched its first astronaut in 2003 aboard the Shenzhou 5 spacecraft. Thenation's second manned flight, Shenzhou 6, carried two astronauts when it launchedin 2005.