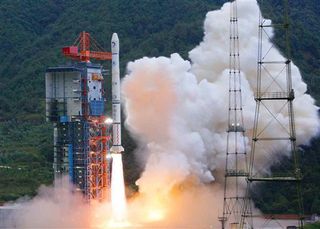 The Chang'eI blasted off at about 6:05 pm on a Long March 3A carrier rocket from the No. 3launching tower in the Xichang Satellite Launch Center in Southwest China's Sichuan Province.

The missionis named after a Chinese goddess who, in a popular fairy tale, lives on theMoon.

Thespacecraft carries a total of eight primary instruments to photograph and mapthe lunar surface, probe its depth, study the regolith?s chemical composition,and analyze the space environment around the Moon.

A CCDstereo camera will produce three-dimensional images of the lunar surface bycompiling three separate, two-dimensional views of each target area. Meanwhile,the probe?s interferometer spectrometer imager is expected to overlay opticalmeasurements with spectra to depict the regional distribution of resources andmaterials.

Chang?e 1will also carry a laser altimeter to take precise elevation measurements of thelunar surface, as well as gamma/X-ray spectrometers to hunt out and measure theamount of up to 14 elements ? among them iron, potassium, uranium and titanium.

A payloaddata management system rounds out Chang?e 1?s instrument package. Also ridingto the Moon aboard the lunar probe are some 30 songs, among them Chinese folksongs and ?The East is Red? ? China?s national anthem ? Xinhua reported inNovember.

The launchis the first step into the country?s three-stage moon exploration plan.

According to Xinhua Chinesespace experts, technicians and other work staff, were joined by experts from Japan, Germany and other countries to observer the launch process.

Thecircumlunar satellite is expected to enter the Earth-moon transfer orbit onOctober 31 and arrive in the moon's orbit on November 5.

Thesatellite will relay the first pictures of the moon in late November and willthen continue scientific exploration for a year.