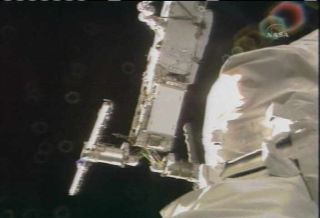 The Port 6 solar array truss is hauled from its former perch of seven years atop the International Space Station during an Oct. 28, 2007 spacewalk during NASA's STS-120 mission.
(Image: © NASA TV.)

Workingwith robotic arm-wielding crewmates inside the ISS, spacewalkers ScottParazynski and Daniel Tani removed bolts and power lines securing the 17.5-tonPort 6 (P6) solar array, beginning its three-day move to the left side of the station?smain truss.

?Don?t dropit,? one of the astronauts joked as crewmates Stephanie Wilson and DougWheelock hauled it away with the station?s robotic arm.

The P6truss will be reattached to the port-most edge of the ISS during a plannedTuesday spacewalk after a delicate ballet that requires handing the 35-foot (10.6-meter)long girder off between the ISS and shuttle robotic arms twice on Monday.Parazynski, a Discovery shuttle astronaut, has equated the task to moving anentire house.

?I believein the crew, I know that they?re ready to do this task,? Discovery commanderPamela Melroy said Saturday. ?Both crews are ready to cope with whatever comesand we?re very hopeful.?

Sunday?s6.5-hour spacewalk began at 5:32 a.m. EDT (0932 GMT) and was the second of a record-tying five excursions planned during NASA?s STS-120mission to the ISS. It marked Parazynski?s fifth career spacewalkand the second for Tani.

?It?s greatto be back in space,? said Tani, who is replacing NASA astronaut ClaytonAnderson as part of the station?s Expedition 16 crew.

The spacewalkersalso added handrails and other equipment to the hull of the station?snew Harmony node and collected samples of metal shavings from inside arotary joint designed to turn the outpost?s starboard solar arrays like apaddlewheel to track the Sun.

The joint is part of the Starboard3/Starboard 4 solar array truss that arrived at the outpost in June. Mission managers hope to determine the source of thevibration to determine whether the joint can continue rotating its outboardsolar wings to maximize space station power production.

Tani also photographed ahandrail suspected of having sharp edges, which could damage the vitalpressurized spacesuits that protect astronauts from the vacuum of space. NASA cut anAugust spacewalk short after an Endeavour shuttle astronaut spotted a smalltear in the outer layers of his spacesuit glove.

While wrapping up today?sspacewalk, Tani spotted his hometown of Lombard, Illinois, just a few hours after finding Ireland,where other relatives live.

With Sunday?sspacewalk complete, the clock is ticking to finish the P6 truss?s move to theport edge of the ISS.

Astronautstemporarily installed the $276 million solar array atop the space station?s Z1truss in 2000, then stowedits expansive solar wings during shuttle flights in December and June. The girdercan stay in its current position at the end of the station?s robotic armfor about 56 hours before the extreme temperatures of space take their toll,mission managers said.

But thereal challenge begins tomorrow, when Wilson and her crewmates will use Discovery?s robotic arm to latch onto the truss.They will then hand it back to the station?s robotic arm, which Wilson will outstretch toits maximum, 57-foot (17-meter) reach on Tuesday to ease P6 into place underthe guidance of two spacewalking crewmates.

?You?ve gotthis big truss, the arm?s fully extended and you?re trying to thread a needlewithout really good visuals,? said Rick LaBrode, NASA?s lead shuttle flightdirector for Discovery?s flight. ?So it is extremely complex, but one that we?vetrained really hard and I have every bit of confidence we?re going to pull thisone off.?

Sunday?sspacewalk marked the 94th spacewalk dedicated to space station assembly andmaintenance, as well as the 66th excursion staged from the orbital laboratoryitself. The excursion brought Parazynski up to 32 hours and 38 minutes ofspacewalking time, while Tani ended with 10 hours and 45 minutes during his twospacewalks.

Parazynskiwill step outside the ISS on two more spacewalks, on Tuesday and Thursday, withWheelock to help reattach the P6 truss and test shuttle heat shield repairtechniques. Mission Control roused him and his Discovery crewmates at about1:08 a.m. EDT (0508 GMT) with the song ?What a Wonderful World? by LouisArmstrong.

?That's howyou start the day in space,? Parazynski said. ?I can't think of a morebeautiful way to begin the day than hear those words. It really describes theview from space.?