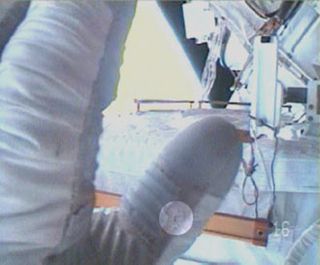 HOUSTON -- Two astronauts primed the oldest power tower atop the International Space Station (ISS) for a future move Wednesday, despite a ripped spacesuit glove that cut their spacewalk short.

But Mastracchio reported a small hole in the Vectran layer of the left spacesuit glove thumb at about the four-hour mark, prompting Mission Control to order him back to the station's Quest airlock early. The spacewalk was slated to run about 6.5 hours.

"I can see the surface under the Vectran material," Mastracchio said. "I don't know where that hole came from."

NASA spacesuit gloves are made of five protective layers, with the Vectran layer the second from the exterior to prevent cuts and abrasions, the space agency said.

"He is in absolutely no danger," NASA commentator Kyle Herring said of Mastracchio, adding that the spacewalk's early end was just a precaution. "His suit and suit parameters are just fine."

Anderson later finished is own tasks to conclude the five-hour and 28-minute spacewalk.

As Mastracchio and Anderson worked outside the ISS, NASA engineers here at the Johnson Space Center were wrapping up a series of tests to determine whether a small gouge in heat-resistant tiles on Endeavour's underbelly will require a spacewalk repair.

A preliminary analysis using computer modeling left NASA optimistic that no repair would be required, but the agency ordered more tests to be sure late Tuesday. A decision on whether to repair the ding or leave it untouched is expected no earlier than late tonight.

Mastracchio, whom shuttle officials have said would likely perform any shuttle tile repair if needed, has a spare set of spacesuit gloves aboard Endeavour should a fix be required, NASA said.

Despite ending their spacewalk early, Mastracchio and Anderson accomplished all of their major tasks to prepare the P6 truss for its relocation in October. The truss was temporarily installed vertically near the station's midpoint in 2000. Its wing-like solar arrays were completely furled during a June shuttle flight for its move to the station's port side.

STS-118 mission specialist Tracy Caldwell choreographed Wednesday's spacewalk from the flight deck of Endeavour, checking in with Mastracchio every hour so to monitor his condition. A sensor in Mastracchio's spacesuit failed in a Monday spacewalk, forcing the spacewalker and his crewmates to rely on verbal checks to make sure he wasn't suffering carbon dioxide poisoning.

"Rick's full of drama on this trip," Caldwell said after the glove damage was found.

Mastracchio and Anderson began the spacewalk at 10:37 a.m. EDT (1437 GMT) and were an hour ahead as they moved two large equipment carts from the portside path of the station's railcar-like Mobile Transporter.

While Anderson grasped the carts from the end of the station's robotic arm, his Expedition 15 crewmate Oleg Kotov and shuttle pilot Charlie Hobaughcautioned him to keep a firm grip.

"Oleg was just saying to make sure you hold on to this item," Hobaugh joked. "He says you have other tendencies while you're on the end of the arm."

"To throw things away?" Anderson replied.

Jokes aside, ISS managers said Wednesday's spacewalk and another planned for later this week are vital for the station's tight construction schedule.

"A lot of the focus at this point is on setting ourselves up for the next set of flights," NASA's deputy ISS program manager Kirk Shireman told SPACE.com. "This is where we had time to get some stuff done because on the next few flights you don't have up-mass, or you don't have crew time to get these tasks done."

Wednesday's spacewalk marked the third - and final - planned extravehicular activity (EVA) for Mastracchio on STS-118 for a total of 18 hours and 13 minutes working outside a spacecraft. It was the second spacewalk for Anderson, who now has 13 hours and nine minutes under his belt.

The spacewalk was the 91st dedicated to ISS assembly or maintenance, and the 63rd staged from the space station itself.