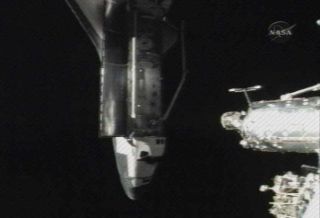 The orbitalrendezvous marks the first time two spacecraft have docked with femaleastronauts in command. Melroy, Whitson and their crews opened the hatchesbetween their two spacecraft at 10:39 a.m. EDT (1439 GMT), trading hearty hugsand laughs before posing for photographs.

?We?re welcoming themwith open arms, and the towels are all clean and laid out,? said Expedition 16flight engineer Clayton Anderson of the STS-120 crew?s arrival.

The joint shuttle-ISScrew will spend abusy 10 days together to add a new pressurized module, swap out one stationcrewmember and move a 17.5-ton solar power tower during five plannedspacewalks.

Anderson, a NASAastronaut, is completing a five-month mission aboard the ISS and will return toEarth aboard Discovery when the shuttle departs on Nov. 4. His replacement,fellow U.S. spaceflyer Daniel Tani, will officially join the ISScrew later today once his Russian-built seat liner is moved into the SoyuzTMA-11 spacecraft berthed the station.

?It?s moving day for meand I can?t wait to settle in my new home,? said Tani, who awoke to the song?Dancing in the Moonlight? piped in from Mission Control here at the Johnson Space Center.

Before Discovery dockedat the ISS, Melroy guided the spacecraft through an orbital back flip about 600feet (182 meters) below the space station. Known as the Rendezvous PitchManeuver, the nine-minute spacecraft somersault allowed Anderson and fellowExpedition 16 flight engineer Yuri Malenchenko to take high-resolutionphotographs of the heat-resistant tiles lining Discovery?s underbelly.

The images, combined withdata from a Wednesday scan of the heat-resistant panels along Discovery?s wingedges and nose cap, will allow engineers on Earth to determine the health ofthe shuttle?s heat shield. An earlyanalysis of the earlier inspection and images of Discovery?s external fueltank has given mission managers confidence that the shuttle?s heat shield is ingood shape, though a definitive answer is expected by the end of the week. NASAhas kept a close eye on shuttle heat shield integrity and fuel tank debrisduring liftoff since the 2003Columbia accident.

With Discoverysuccessfully docked at the ISS, a busy mission of orbital construction is setto begin.

Tucked in the shuttle?spayload bay is Harmony, a nearly16-ton module that will serve as the anchor for future internationallaboratories at the space station. Discovery?s STS-120 crew will attach theItalian-built Harmony node to a temporary berth on the station?s Unity nodeduring the first of five planned spacewalks during their planned 14-daymission. It will be moved to the front of the Destiny module once Discoveryundocks.

The shuttle astronautswill also move a massive solar array segment from its mast-like perch atop theISS to a permanent spot on the port-most edge of the station?s backbone-likemain truss.

?Everyone here is justecstatic,? STS-120 mission specialist Scott Parazynski told Mission Control.?We?re so fired up to be here and are looking forward to the next several daysshared with the station crew.?