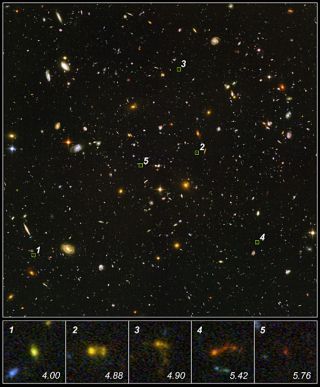 A view of Hubble's Ultra Deep Field, where several objects are identified as the faintest, most compact galaxies ever observed in the distant Universe. They are so far away that we see them as they looked less than one billion years after the Big Bang.
(Image: © NASA/ESA/N. Pirzkal)

Astronomershave found nine of the faintest, tiniest and most compact galaxies ever seen.

The littleobjects are hundreds to thousands of times smaller and vastly younger than ourMilky Way, lending support to a ?building block? theory in which hundreds ofthe tiny galaxies merge together and form larger bodies of stars.

"Theseare among the lowest mass galaxies ever directly observed in the earlyuniverse," said Nor Pirzkal of the Space Telescope Science Institute in Baltimore, Md.

Pirzkalsaid their petite mass, observed by the Hubble Space Telescope and confirmed bythe Spitzer Space Telescope, shows these galaxies are some of the smallestbuilding blocks of the universe, aside from stars themselves.

The twotelescopes saw light emitted from the galaxies only 1 billion years after thetheoretical Big Bang, giving arare glimpse into the past. Sangeeta Malhotra, an astronomer at Arizona State University who helped make the discovery, said the absence of infrared lightin the sensitive Spitzer images showed the stars are first-generation and onlya few million years old.

Hubbledetected hot blue stars within the nine galaxies, indicating that the youthfulstars are in the process of turning hydrogen and helium into heavier elementslike carbon, oxygen and silicon necessary forplanet-building--and life. The astronomers speculated, however, that suchstars probably haven't begun to "pollute" space with the crucialelements forging within their cores.

Thedevelopment of three of the galaxies appears to be slightly disrupted; ratherthan taking on a rounded-blob shape typical of the youngest galaxies, they're stretchedinto tadpole-like forms. Astronomers think it may signal their first fusionwith neighboring galaxies to form larger, cohesive structures.

Thegalaxies were observed in the Hubble Ultra Deep Field (HUDF) image with Hubble'sAdvanced Camera for Surveys and the Near Infrared Camera and Multi-ObjectSpectrometer. Observations were also done with Spitzer's Infrared Array Cameraand the European Southern Observatory's Infrared Spectrometer and Array Camera.