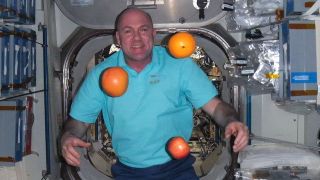 This probably tops your most embarrassing butt-dial moment: Back in 2012, Dutch astronaut André Kuipers mistakenly called 911 from the International Space Station (ISS).

"If you're in space, it's like you are making a call via Houston — first you dial the 9 for an outside line, and then 011 for an international line," Kuipers told the Dutch outlet Nederlandse Omroep Stichting earlier this month. (The article is in Dutch; the quotes here are provided by Google Translate.)

"I missed the 0, and indeed there was a report at the Houston alarm center: something happened in the Johnson Space Center, and security went off and they went to the room where the call came from," Kuipers recalled. "There was no one on the ground, but there was the line where the space station came in. I was a little disappointed that they had not come upstairs."

Kuipers isn't the only astronaut to come down with a case of fumble fingers in orbit; British astronaut Tim Peake had a similar issue a few years back.

"I'd like to apologise to the lady I just called by mistake saying 'Hello, is this planet Earth?' — not a prank call ... just a wrong number!" Peake tweeted in December 2015.

The 60-year-old Kuipers, a physician by training, has retired from the European Space Agency (ESA) astronaut corps. He flew to the ISS twice during his spaceflight career, spending a brief nine days aboard the orbiting lab in 2004, then living off Earth again from December 2011 through July 2012.

Peake, 46, is an active ESA astronaut. He has one spaceflight under his belt, serving aboard the orbiting lab from December 2015 until June 2016.