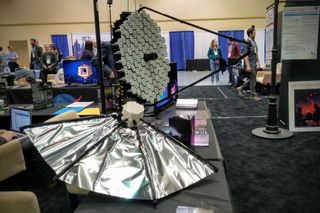 A Lego model of the Large UV Optical Infrared Surveyor (LUVOIR), a proposed mission concept that NASA might launch in the mid-2030s, was on display at the 233rd meeting of the American Astronomical Society in Seattle on Jan. 6 to 10, 2019.
(Image: © Space.com)

SEATTLE — A Lego model of NASA's Large UV Optical Infrared Surveyor (LUVOIR), a proposed mission that could one day succeed the James Webb Space Telescope, has landed here at the 233rd meeting of the American Astronomical Society (AAS).

LUVOIR is one of four big astrophysics missions that NASA is thinking about launching in the mid-2030s. The homemade Lego space telescope was assembled by LUVOIR team member Christopher Stark, an astronomer with the Space Telescope Science Institute (STScI) in Baltimore, Maryland, who has worked on the proposal for the LUVOIR mission. He spent five months designing and building it in his home.

Constructed with about 4,200 pieces, the LUVOIR space telescope model has movable segments that tip, tilt and click into place in just the way the actual telescope would unfold in space after launch. [LEGO Space: Building the Future With Toy Bricks (Gallery)]

The Lego LUVOIR also has a fully deployable and stowable sunshade. The sunshade on the Lego model was too big to fit on the display table at NASA's booth here at AAS, so Stark had to remove half of it for the conference. "Even if this was completed around the other side, that would still only be half a sunshade," because the real sunshade would also have to extend even farther outward, Stark told Space.com.

"The scale is roughly 1 inch to 1 meter, so it's pretty close to scale with the minifigure" of the late Nancy Grace Roman, an astronomer known as the "Mother of Hubble," Stark said. Roman was about 5 feet tall, and it just so happened that the Lego minifigure was in the same proportion to the Lego LUVOIR as Roman would have been to the life-size telescope.

Stark said NASA's LUVOIR team was inspired by a Lego model of the Extremely Large Telescope, which was on display at a previous AAS meeting a few years ago. Even though Stark said he's "not really a Lego fanatic or anything," he ended up being in charge of the project.

He came up with a Lego LUVOIR schematic using special Lego design software, then ordered the specific pieces online. For some parts of the telescope, he abandoned the software and "built it on the fly," he said. Stark spent about $500 on Legos for the entire project and was left with about $100 worth of extra, unused pieces.

Because the Lego LUVOIR is not entirely complete — its science instruments and half of its sunshield have not yet been built — perhaps Stark will be able to put a few of those spare pieces to use in the future. "I may work on the instruments a little bit if I can get the lead engineers to give me a schematic to show me what they look like," Stark said. "I will probably finish off the sunshade and eventually, I'll probably just hang it in my office."

But before he gives LUVOIR all its bells and whistles, Stark is working on a separate Lego project for NASA — a model of the James Webb Space Telescope.