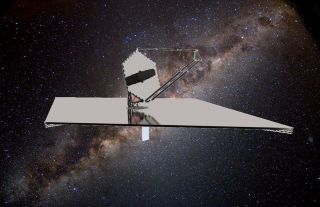 NASA's Large UV Optical Infrared Surveyor (LUVOIR) is one of four astrophysics missions that could be selected to launch in the mid-2030s.
(Image: © NASA)

SEATTLE — NASA still hasn't launched its new James Webb Space Telescope (JWST), a successor to the beloved and aging Hubble Space Telescope. But the agency is already preparing for an even bigger and better space observatory to eventually replace JWST.

Four teams of NASA scientists are getting ready to submit their proposals for future flagship-class astrophysics missions — the most expensive of all NASA's science missions. Of the four, only one mission concept will be selected to launch in the mid-2030s.

The four mission-concept studies were detailed here at the 233rd meeting of the American Astronomical Society (AAS) this week (Jan. 6-10), even though many of the NASA scientists were furloughed due to the government shutdown and unable to attend the conference.

Each of the proposed missions is a space telescope designed to study things like stars, galaxies, black holes, alien planets and objects within Earth's solar system. The telescopes would probe the mysteries of the universe by detecting different wavelengths of light, from low-energy infrared to high-energy ultraviolet and X-ray radiation.

NASA hasn't put prices on the missions just yet, but flagship-class missions typically cost over $1 billion. However, JWST is expected to cost NASA upward of $10 billion after years of delays and cost overruns.

Although NASA will be responsible for developing and operating the mission, the agency won't actually get to choose which of the four missions it will pursue. Rather, NASA will submit its proposals to the National Academy of Sciences (NAS), where a committee will decide which of the missions best suits the priorities of the astrophysics community. The NAS determines those priorities by collecting input from astronomers nationwide and publishing a report called a decadal survey about once every 10 years.

So, what will the decadal committee deem the most popular and important fields of research in astrophysics in the 2030s? What kind of scientific tools will astronomers use to study the cosmos some 15 to 20 years from now? From the Big Bang to the possibilities of life beyond Earth, there's a lot that scientists hope to investigate using space-based instruments. But because NASA operates on a limited budget, not all of the proposed missions will come to fruition. Here's a summary of the four flagship-class missions that are on the table for the 2020 decadal survey.

One candidate mission, called the Large UV Optical Infrared Surveyor (LUVOIR), is essentially a beefed-up version of the Hubble Space Telescope. Like Hubble, this instrument would observe the universe in ultraviolet, infrared and visible wavelengths of light.

However, with a diameter of about 50 feet (15 meters), LUVOIR's mirror would be more than six times wider than the one in Hubble. This means that LUVOIR would see the universe with six times the resolution of Hubble. And with 40 times the light-gathering power of the older telescope, LUVOIR would see fainter, smaller and more-distant objects.

NASA has come up with two different options for LUVOIR's design. The larger version, LUVOIR-A (described above), would be built to launch on NASA's upcoming Space Launch System (SLS) megarocket. LUVOIR-A is "the biggest we could fit on SLS," Jason Tumlinson, a researcher with the Space Telescope Science Institute (STSci) said during a presentation at AAS on Tuesday (Jan. 8).

SLS, which is also over budget and behind schedule, should launch on its maiden flight sometime in 2020. "If NASA doesn't build that rocket, then we'll go with the smaller version" of LUVOIR — LUVOIR-B, Tumlinson said. This model would have a mirror with a diameter of 26 feet (8 m), and the smaller size would entail a slightly lower resolution than for LUVOIR-A.

LUVOIR is designed to tackle a variety of astronomical research projects, like searching for habitable exoplanets; studying the formation and evolution of stars and galaxies; mapping dark matter throughout the universe; and imaging objects in the solar system, like planets, comets and asteroids. "Regardless of what you're interested in, LUVOIR has an instrument for you," Tumlinson said.

The Habitable Exoplanet Observatory (HabEx) is designed to do exactly what its name implies: observe potentially habitable exoplanets around sun-like stars.

While looking for "biosignatures" like water and methane, which may indicate the presence of life on another planet, HabEx would also become the first telescope to directly image an Earth-like exoplanet. To be considered potentially "Earth-like," an exoplanet must be terrestrial, or rocky and must orbit its parent star in the habitable zone, where the temperature is just right for liquid water to exist.

HabEx would deploy a large, sunflower-shaped "starshade" to block light from stars that have planets, allowing the telescope to study faint exoplanets in unprecedented detail. The HabEx telescope itself would have a diameter of 13 to 26 feet (4 to 8 m) — NASA is still studying different designs options with different sizes — but the starshade would be far larger, with a diameter of 236 feet (72 m).

In addition to collecting visible-light images, HabEx would also conduct ultraviolet and infrared observations of the cosmos, making this observatory useful for more than just exoplanet research. Using the same instruments that it would employ for studying exoplanets, HabEx could also observe and map stars and galaxies, study the expansion of the universe, and investigate dark matter.

A potential successor to NASA's Chandra X-Ray Observatory is Lynx, a proposed space telescope that would uncover the "invisible" universe by detecting high-energy X-ray radiation that is not visible to the human eye. This means researchers could use the instrument to look for things like supernovas and black holes.

Lynx was designed to peer through space and time to look at the earliest black holes in the universe, allowing researchers to better understand how these objects form and grow. The telescope could also observe the formation and evolution of galaxies and galaxy clusters.

It would also be able to investigate the birth and death of stars and capture "exquisite maps of exploding stars," like Chandra did with its image of Tycho's supernova, said Ryan Hickox, an astrophysicist at Dartmouth College in New Hampshire. But with 100 times the resolution of Chandra, Lynx would produce even more-spectacular images, he said. And while Chandra can study stars located up to about 1,300 light-years away, the instruments on Lynx would see more than 16,000 light-years away, or 12.5 times the distance.

With a primary mirror diameter of about 10 feet (3 m), Lynx would be only slightly wider than Hubble. However, the opening of the tube-shaped telescope would be five times larger than Chandra's, which measures only 4 feet (1.2 m) in diameter.

This far-infrared surveyor mission would be able to peer through obscuring dust clouds to get a clear view of stars and exoplanets in star-forming regions. It could be considered a next-generation version of the Herschel Space Observatory, a European mission that observed the universe in infrared for four years before shutting down in 2013.

With a diameter of about 50 feet (15 m), the Origins Space Telescope would be about the same size as LUVOIR and four times the size of Herschel. Like Herschel, this proposed telescope would require a special "cryocooler" system to keep its instruments from getting too hot. By keeping cool, the telescope would increase its sensitivity, and the mission's scientists have said it could be up to 1,000 times more sensitive than any other infrared telescope launched to date.

NASA and the rest of the astrophysics community will have to wait about 23 months to find out which of the four mission concepts gets selected to launch. Once a mission is selected, it will take around 15 years to develop before it will launch.

Until then, NASA has two more big, flagship-class astrophysics missions to look forward to: JWST and WFIRST, the Wide Field Infrared Survey Telescope. After several delays, JWST is currently scheduled to launch in 2021, while WFIRST is on track to launch in 2025.