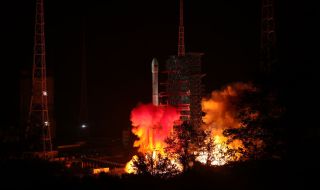 China is once again on the threshold of a historic first in its fast-paced exploration of Earth's moon.

Having sent three previous missions moonward since 2007, including one that hosted the nation's first-ever robotic lander and rover, China's latest lunar foray began in the early hours of Dec. 8, 2018, when a Long March-3B carrier rocket launched from the Xichang Satellite Launch Center in southwest China's Sichuan Province, carrying the Chang'e 4 spacecraft. Consisting of a lander and a rover, Chang'e 4 is targeting the moon's far side, the lunar hemisphere that is always facing away from Earth. No spacecraft has ever achieved a soft landing there before, although in 1962 NASA crashed its Ranger 4 probe into the far side surface.

After its launch and 4.5-day voyage to the moon, Chang'e 4 nudged itself into an elliptical lunar orbit to await its appointment with fate. Chinese officials have not publicly announced when Chang'e 4 will attempt a landing, but most experts suspect it would occur no sooner than early January 2019, timed to coincide with the onset of the roughly 14-day period when the far side is bathed in plentiful sunlight for the spacecraft's solar arrays. The spacecraft's purported landing locale is Von Kármán, a lunar impact crater situated within an even larger impact crater called South Pole-Aitken basin on the lunar far side. That basin is the oldest and largest impact feature on the moon. [China's Chang'e 4 Moon Far Side Mission in Pictures]

"Relative to the near side, in many respects we know very little about the far side," said Mark Robinson, a planetary scientist at Arizona State University and the principal investigator for NASA's Lunar Reconnaissance Orbiter Camera (LROC).

One hope Robinson and other U.S.-based lunar scientists have is that Chang'e 4 might be lucky enough to land near an elusive "mare" region on the lunar far side. Composed of ancient, cooled lava, these basalt-rich deposits are abundant on the lunar near side but far less frequent on the far side. Their name comes from the Latin word for "sea," which is exactly what astronomers centuries ago suspected they were due to their dark coloration.

"We do not have a documented sample of a farside mare, so this would be a first look," Robinson told Scientific American. Mare basalts represent our best look at the moon's overall composition and also its mysterious mantle — the layer between the core and crust — so a detailed characterization of a farside mare could allow scientists to learn, among other things, why the near side and far side look so different, he said.

After Chang'e 4 lands, Robinson said, the LROC camera system aboard NASA's Lunar Reconnaissance Orbiter should be able to clearly spot the Chinese spacecraft after touchdown. "We should be able to identify the lander and rover tracks if not the rover itself," he said.

Jim Head, an eminent planetary scientist at Brown University in Providence, R.I., said the Chang'e 4 mission is further evidence of China's view of the moon as not only an object of scientific interest but also an important strategic asset in the nation's long march to become a new global superpower.

"All spacefaring nations have their sights set on the moon, for reasons of both pride — how they view themselves as a nation — and prestige, in the sense of how others view them," Head said. "Furthermore, as in the initial Cold War competition between America and the U.S.S.R., successful space exploration is a huge demonstration of 'soft power,' the ability to show technological prowess and leadership in a non-threatening peaceful manner." He added: "China is clearly in the vanguard of renewed international interest in robotic and human exploration of the moon."

In China's case, part of the technological might associated with its foray to the lunar far side is a satellite called "Queqiao," launched in May 2018 to serve as a communications relay for Chang'e 4. Because the moon's bulk blocks Earthly radio transmissions to and from the far side, only a satellite such as Queqiao can send data in near real time between the spacecraft and its ground-based controllers. Queqiao, Head said, could be seen less as a one-off support mission and more as the first piece of a burgeoning "lunar exploration communications global infrastructure."

As for what he hopes Chang'e 4 might uncover, Head noted that any mission to the lunar far side is essentially to "Luna Incognita," and thus inevitably will lead to new discoveries. "Exploration is investigating the unknown, and the demonstration that we can land and explore the lunar far side, particularly the South Pole-Aitken basin, is a fundamental accomplishment, the first steps, a foothold on a new 'continent.' Just as it is hard to predict the future, it is hard to predict the results from exploration of the unknown. That's why we explore!" [China's Moon Missions Explained (Infographic)]

If all goes according to plan, Chang'e 4 should be followed by the Chang'e 5 mission now slated for launch in late 2019. Chang'e 5 will mark China's second mission to the lunar near side and will attempt to retrieve samples from Mons Rümker in Oceanus Procellarum, a large area of lunar mare in the northwest of the moon's near side.

Meanwhile, other nations have lunar exploration plans of their own. India's Chandrayaan 2 lunar lander is set to launch in early 2019, and Russia has announced its intentions to undertake a robotic mission to the moon within the next five years. In the U.S., prodded by the Trump administration's pro-moon stance, NASA is planning the "Gateway," a lunar-orbiting, astronaut-tended space station, as well as a Commercial Lunar Payload Services (CLPS) program that would be a public-private partnership to rely on private industry to offer transportation to and from the lunar surface for select payloads.

"CLPS in particular provides multiple platforms and capabilities to reach the moon through commercial opportunities and partnerships. These CLPS opportunities are key to rapid innovation and rapid spaceflight, and it will be interesting to compare the results of the United States and Chinese approaches in the coming few years," said Head.

John Logsdon, professor emeritus of political science and international affairs at George Washington University's Space Policy Institute, said that now is the time to cooperate rather than compete in a renewed global push for lunar exploration.

"China's farside lander is the next step in the country's long-planned program of lunar exploration. As the United States plans its own lunar campaign, to me it makes no sense to exclude Chinese achievements from [an] integrated approach to learning more about the moon," said Logsdon. "Rather than view Chang'e 4 as competitive and a threat to U.S. leadership, perhaps the new Congress will allow NASA to work with China as well as other spacefaring partners in a truly global exploration effort." In 2011, Congress enacted legislation forbidding NASA from any bilateral coordination with China.

According to Marcia Smith, a space policy expert and editor of SpacePolicyOnline.com, from a science standpoint China's interest in studying the moon seems to dovetail with NASA's renewed interest in all things lunar. Chang'e 4 involves a number of international partners on the mission from the Netherlands, Germany, Sweden and Saudi Arabia, she noted. NASA is seeking partners for its lunar program, too, but must exclude China as a result of Congress's legal prohibitions. [Moon Master: An Easy Quiz for Lunatics]

"Granted, the geopolitical situation with China is delicate, but the same is true of Russia, yet NASA and Russia have extensive space cooperation that is heralded as the exception to a strained relationship on other fronts," Smith said.

So, the circumlunar question of U.S.-China moon politics looms large: If NASA is allowed to cooperate with Russia to achieve common civilian space goals, why not China?

"NASA is anxious to put laser retroreflectors on any spacecraft that lands on the moon," Smith said. "Perhaps adding one to Chang'e 5 could be a first step." Congress' prohibition is not complete, she noted. The language of the act limiting bilateral cooperation instead mandates that Congress must pre-approve anything NASA does with China. "So, the compromise could be to keep the language, but encourage NASA to take a first step, like the retroreflectors or some other small scientific project, and see what happens."

Leonard David is author of Moon Rush: The New Space Race to be published by National Geographic in May 2019. A longtime writer for Space.com, David has been reporting on the space industry for more than five decades.