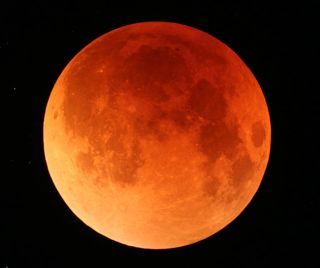 A view of the lunar eclipse from Japan's northernmost main island of Hokkaido on Aug. 28, 2007. The Earth's shadow crept across the moon's surface slowly eclipsing it and turning it to shades of orange and red during second total lunar eclipse this year.
(Image: © Rikubetsu Astronomy and Terrestrial Science Museum/AP)

Those who gazed into the darkened skies early Tuesday morningcaught a breathtaking view of a blood-red lunar eclipse.

The second such event of the year gave those along the PacificRim, including California, New Zealand and eastern Australia a view of a totallunar eclipse from start to finish. Inhabitants in the Central U.S. and Canada through New England and even Japan, however, also got a spectacular view.