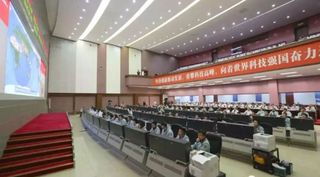 The spacecraft's single main variable thruster fired at 80 miles (129 km) distant from the moon following the issuing of a command from the Beijing Aerospace Command and Control Center (BACC) at 3:39 a.m. EST (0839 GMT). [China's Chang'e 4 Moon Far Side Mission in Pictures]

The China Lunar Exploration Project (CLEP) announced the success of the crucial braking maneuver within minutes and confirmed that the spacecraft was functioning well and will begin preparations for communications tests with a relay satellite and refining its orbit.

Three trajectory correction maneuvers had been planned for the lunar transfer orbit phase, but just one, carried out Dec. 9, was required, with the first and final maneuvers deemed unnecessary and thus canceled.

Consisting of a lander and a rover, the spacecraft will attempt the first-ever soft landing on the far side of the moon — which due to tidal locking never faces the Earth — in early 2019.

The lander and rover are equipped with cameras and science payloads to analyze the lunar surface geology and subsurface, solar wind interactions and carry out low-frequency radio observations in the unique radio-quiet environment on the far side of the moon.

Communications with the spacecraft will be facilitated by the 'Queqiao' relay satellite launched in May and subsequently inserted into a halo orbit around the second Earth-moon Lagrange point, some 40,000 to 53,000 miles (65,000 to 85,000 km) beyond the moon.

The landing will target candidate landing sites in the South Pole-Aitken Basin (SPA), with the selected site understood, but not officially announced, to be the 116-mile-diameter (186 km) Von Kármán crater.

The South Pole-Aitken Basin is a 1,550-mile-wide (2,500 km), 7.5-mile-deep (12 km) ancient impact crater of intense scientific interest which could contain exposed material from the moon's upper mantle and clues to the history and development of the moon.

James Head, a planetary scientist at Brown University's Department of Earth, Environmental and Planetary Sciences in Providence, Rhode Island, told SpaceNews that instruments such as the Lunar Penetrating Radar, also aboard China's previous Chang'e 3 moon mission, will provide images of the structure of the lunar soil layers and any subsurface lava flow units, and any interbedded soils, and “help us to understand the three-dimensional nature and extent of subsurface units.”

Head stated that the Visible and Near-Infrared Imaging Spectrometer (VNIS) payload is also of very high interest and will allow comparisons between the mineralogy of the floor of the South Pole-Aitken basin to nearside units and help answer questions such as, Did the South Pole-Aitken Basin impact penetrate to the lunar mantle?

No official date has been released for the powered descent landing attempt, but the China Aerospace Science and Technology Corporation (CASC), the main contractor for the Chinese space program, indicated shortly after launch that the landing will take place in the first days of January 2019, following sunrise over the main candidate landing within the Von Kármán crater in late December.

Chang'e 4 was originally planned as a backup to the Chang'e 3 lander and rover mission, which in December 2013 made China the third country to achieve a soft landing on the lunar surface, and the first since the Soviet Union's Luna 24 in 1976.

The Chang'e 4 mission is to be followed by China's first sample return mission, Chang'e 5, which could launch in late 2019 on a Long March 5 rocket.