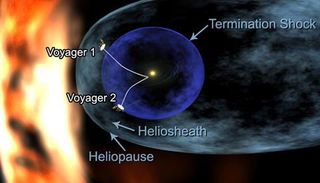 NASA's twoVoyager spacecraft are celebrating three decades of flight as they careentoward interstellar space billions of miles from the solar system's edge.

Voyager 2launched on Aug. 20, 1977, and Voyager 1 launched on Sept. 5, 1977. Bothspacecraft continue to return information from distances more than three timesfarther away than Pluto, where the sun's outer heliosphere meets the boundaryof interstellar space.

"TheVoyager mission is a legend in the annals of space exploration. It opened oureyes to the scientific richness of the outer solar system, and it has pioneeredthe deepest exploration of the sun's domain ever conducted," said AlanStern, associate administrator for NASA's Science Mission Directorate,Washington, D.C. "It's a testament to Voyager's designers, builders andoperators that both spacecraft continue to deliver important findings more than25 years after their primary mission to Jupiter and Saturn concluded."

Originallydesigned as a four-year mission to Jupiter and Saturn, the Voyager tours wereextended because of their successful achievements and a rare planetaryalignment. The two-planet mission eventually became a four-planet grand tour.After completing that extended mission, the two spacecraft began the task ofexploring the outer heliosphere.

Duringtheir first dozen years of flight, the spacecraft explored Jupiter, Saturn,Uranus, Neptune and their moons. These planets were previously unknown worlds.The Voyagers returned never-before-seen images and scientific data and helpedmake fundamental discoveries about the outer planets and their moons.

"TheVoyager mission has opened up oursolar system in a way not possible before the Space Age," said EdwardStone, Voyager project scientist at the California Institute of Technology,Pasadena, Calif. "It revealed our neighbors in the outer solar system andshowed us how much there is to learn and how diverse the bodies are that sharethe solar system with our own planet Earth."

In December2004, Voyager 1 began crossing the solar system's final frontier. Called theheliosheath, this turbulent area, approximately 8.7 billion miles from the sun,is where the solar wind slows as it crashes into the thin gas that fills thespace between stars. Voyager 2 could reach this boundary later this year,putting both Voyagers on their final leg towardinterstellar space.

Eachspacecraft carries five fully functioning science instruments that study thesolar wind, energetic particles, magnetic fields and radio waves as they cruisethrough this unexplored region of deep space. The spacecraft are too far fromthe sun to use solar power, and instead run on radioactive generators thatproduce less than 300 watts of power, the amount of power needed to light up abright light bulb..

"Thecontinued operation of these spacecraft and the flow of data to the scientistsis a testament to the skills and dedication of the small operations team,"said Ed Massey, Voyager project manager at NASA's Jet Propulsion Laboratory in Pasadena, Calif.

Each of theVoyagers carries a golden record that is a time capsule with greetings, imagesand sounds from Earth. The records also have directions on how to find Earth ifthe spacecraft is recovered by something or someone.

NASA's nextouter planet exploration mission is New Horizons, which is now well pastJupiter and headed for a historic exploration of the Pluto system in July 2015.