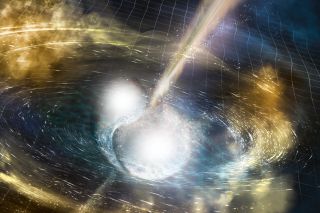 The historic neutron-star crash that astronomers observed last year didn't generate a black hole after all, at least not initially, a recent study suggests.

In October 2017, researchers announced that they had detected both light and gravitational waves — the ripples in space-time first predicted by Albert Einstein a century ago — emanating from the merger of two superdense stellar corpses known as neutron stars.

This epic collision — called GW170817, because it was first spotted on Aug. 17, 2017 — marked the beginning of the era of "multimessenger astrophysics," astronomers said. This term refers to the study of a cosmic object or phenomenon using at least two different types of signals. [Neutron-Star Crash: A Gravitational Waves Discovery in Pictures]

Data gathered by the Laser Interferometer Gravitational Wave Observatory (LIGO) project indicated that the object created by the merger was about 2.7 times more massive than the sun. That's right on the neutron star-black hole borderline, so the identity of the newly formed body was unclear: It was either the least massive black hole ever discovered, or the most massive neutron star.

Astronomers initially leaned toward the black-hole interpretation, but the recent study argues for a neutron star — specifically, a supermagnetic type known as a magnetar. That's because the authors dug a new signal out of the data collected by LIGO and its sister project, Virgo — a 5-second descending "chirp" that began after the initial round of gravitational waves, but before an accompanying burst of high-energy gamma rays.

This newly discovered chirp's frequency was less than 1 kilohertz (kHz), the study reports. That's consistent with what a magnetar should produce, and significantly lower than the minimum value expected from a roughly 3-solar-mass black hole, which should be at least 2 kHz, study team members said.

"We're still very much in the pioneering era of gravitational-wave astronomy," lead author Maurice van Putten of Sejong University in South Korea, said in a statement. "So, it pays to look at data in detail. For us this really paid off, and we've been able to confirm that two neutron stars merged to form a larger one."

The fate of the magnetar, however, is unknown. It may enjoy a long life as a fast-spinning neutron star called a pulsar, or it may eventually collapse to form a black hole, the researchers wrote in the study, which was published online in September in the journal Monthly Notices of the Royal Astronomical Society: Letters.