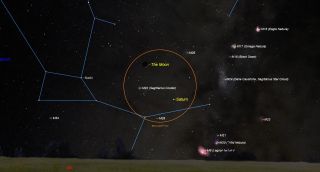 In the southwestern sky during early evening on Sunday, November 11, the crescent moon will be visible three degrees (about 3 finger widths) to the upper left of the planet Saturn. Both objects will appear within the field of view of binoculars (green circle) until they set in the west at 8 p.m. local time.
(Image: © Starry Night software)

If the weather is clear in your area on Sunday evening (Nov. 11) on through late next week, you will have an opportunity to see what probably are for most people the three "most asked for" objects to look at through a telescope: the moon and the planets Saturn and Mars.

So far as the planets are concerned, recall that during the middle and latter part of the summer we had four bright planets conveniently draped across the evening sky. Arrayed from the southwest to the southeast were Venus, Jupiter, Saturn and Mars. But Venus has since moved over into the morning sky, while Jupiter is too close to the sun to be seen.

That now leaves us with only Saturn and Mars to look for after the sun has gone down, and in another month it will be Saturn's turn to depart as well. This weekend, the moon will pay the "ringed wonder" a visit and then will rendezvous with Mars on Thursday. Let's take a closer look at both pairings, starting with the moon and Saturn. [The Brightest Planets in November's Night Sky: How to See Them]

It will soon be time to bid a fond farewell to the showpiece of the solar system, the magnificent ringed planet Saturn. We'll have about another month before it begins to disappear into the sunset fires. And Sunday will bring one of the final opportunities for many to make a positive identification of it, as it will be near to a waxing crescent moon. Wait until about an hour after the sun has gone down, then concentrate your gaze toward the southwest horizon.

The moon will be four days past new phase and 18 percent illuminated, hovering nearly 20 degrees above the horizon. As your clenched fist held at arm's length measures about 10 degrees in width, that lunar arc will appear almost "two fists" up. Once you spot the moon, take note of a solitary bright "star" shining with a sedate yellowish-white tint to its lower right. That will be the solar system's version of the "lord of the rings." Of course, be sure in advance that there are no tall trees or buildings to obstruct your view of these two celestial bodies. After all, both will be lowering rapidly as the sky darkens and both will remain in view for just 90 minutes more before they disappear below the horizon.

Of course, you can see Saturn's famous rings only with a telescope, though some might catch a glimpse of them using steadied (or image-stabilized) high-powered binocularsor small spotting scopes. But to get a definitive view you'll need an eyepiece magnifying at least 30 power. Larger instruments will provide more pleasing images. Through a 6-inch telescope at 150 power, the view is quite dramatic; with a 10-inch at 250 power, the sight is jaw-dropping. But get your viewing in as soon as possible in the evening, since our atmosphere is so much more turbulent near the horizon; as Saturn descends the southwest sky its image will appear to "churn," or become somewhat distorted.

After leaving the vicinity of Saturn, the moon will head on an easterly course against the background stars, and on Monday, Tuesday and Wednesday nights it will be pretty much by itself. To the owner of a telescope, the moon is perhaps the most interesting of all sky objects, because it's close enough to be seen really well. Even a simple pair of 7-power binoculars will show definite features on its surface. Check the area especially around the line that separates light and dark (called the "terminator") and you'll see craters and other lunar features stand out in bold relief because they're partially in shadow.

With each passing night, more of the lunar surface will become illuminated and the crescent will gradually widen. Finally, on Thursday evening it will be another planet's turn to be visited by the moon. That will be Mars, the Red Planet.

Incidentally, while most almanacs and calendars will list Thursday (Nov. 15) as the evening of the first quarter (half) moon, this isn't strictly correct. That's because the moment of first-quarter phase takes place at 1454 GMT, or 9:54 a.m. Eastern Time. That's when the moon is 50 percent illuminated and the terminator appears straight. But at that point, moon is below the horizon for North America. When we get to the evening hours, the moon will be many hours past first quarter; it will be 53 percent illuminated and the terminator will no longer be straight, but slightly convex.

About 3 degrees to the upper left of the moon that evening you'll see Mars, which continues to draw away from the Earth. While we call Mars the "red" planet, you will see that it actually shines with more of a yellowish-orange tint. That coloration is due to rusting iron oxide that covers much of the Martian surface. Here on Earth we have something quite similar to that in the colors of the famous Painted Desert in Arizona. Still, the yellow-orange color apparently suggested blood to ancient skywatchers, and since the "wandering stars" we know as planets were named for ancient deities, it seemed fitting to name this topaz wanderer after the god of war.

On Nov. 1, Mars blazed at -0.6 magnitude at a distance of 73.4 million (118.2 million kilometers) miles from Earth. But by month's end, it will be 20.5 million miles (nearly 33 million km) farther away from us and consequently will have noticeably dimmed to magnitude 0, or only about one-third as bright as it appeared at the end of July (lower magnitudes are brighter). Unfortunately, a massive planetwide dust storm hid most of the surface of Mars back then. The storm has since cleared, but the apparent size of Mars now appears only about 40 percent as large as it did when it was closest to Earth. Nonetheless, some observers such as Frank J. Melillo of Holtsville, New York, are still taking some good-quality images of it.

From here on, Mars will continue to shrink and get dimmer as its distance from Earth increases. By the start of 2019, even a large telescope will have difficulty bringing out any surface features. By then, Mars will be only a tiny dot.