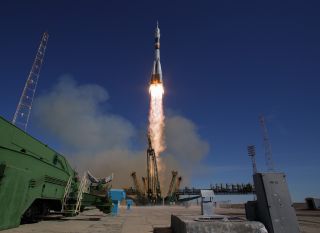 The hiatus in human spaceflight caused by last month's failure of a Russian Soyuz rocket will be quite brief indeed.

Three crewmembers will launch toward the International Space Station (ISS) atop a Soyuz on Dec. 3, Russian space officials announced today (Nov. 1). That target date falls less than eight weeks after the Oct. 11 launch anomaly, which forced the Soyuz spacecraft carrying NASA astronaut Nick Hague and cosmonaut Alexey Ovchinin to make an emergency landing on the steppes of Kazakhstan.

The Russian federal space agency, known as Roscosmos, also revealed today the results of the Soyuz-anomaly investigation. The failure occurred about 2 minutes after liftoff from Baikonur Cosmodrome in Kazakhstan, when one of the Soyuz's four strap-on boosters (the one known as Block D) failed to separate properly and instead slammed into the rocket's core stage.

"The abnormal separation was caused by the nonopening of the lid of the nozzle intended to separate aside Block D oxidizer tank, due to the deformation of the separation sensor pin [which was bent by 6 degrees and 45 minutes]," Roscosmos officials said in a statement today. "It was damaged during the assembling of the strap-on boosters with the core stage (the Packet) at the Baikonur Cosmodrome."

The quick return to flight will alleviate concerns about how well the ISS can function when understaffed or completely unstaffed. The Soyuz rocket-spaceship duo has been astronauts' only ride to and from the orbiting lab since NASA grounded its space shuttle fleet in 2011.

This complete dependency should end relatively soon. The U.S. companies SpaceX and Boeing are developing astronaut taxis under multibillion-dollar NASA contracts, and both vehicles are scheduled to make their first crewed test flights in the middle of next year.

Hague and Ovchinin will likely get to fly again before those two private spacecraft come online. Roscosmos chief Dmitry Rogozin said last month that plans call for the two astronauts to launch toward the ISS in spring of 2019.