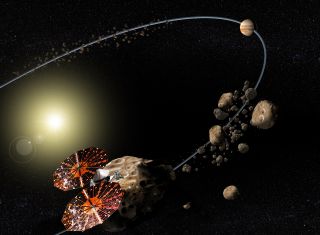 An artist's depiction (not to scale) of the Lucy spacecraft visiting the Trojan asteroids near Jupiter.
(Image: © NASA/SwRI)

A NASA mission designed to study a whopping seven different asteroids in one shot has officially been given a schedule and budget by the agency after successfully passing a crucial review.

That mission, called Lucy, is now due to launch in October 2021, when it will begin a 12-year flight through the solar system. Along the way, it will visit one object in the asteroid belt and six different asteroids in the clumps that precede and follow Jupiter, called Trojan asteroids.

"Up until now this mission has entirely been on paper," Hal Levison, an astronomer at the Southwest Research Institute and principal investigator of the Lucy mission, said in a NASA statement. "Now we have the go ahead to actually cut metal and start putting this spacecraft together."

The mission takes its name from a famous female fossil specimen of Australopithecus afarensis, an early relative of humans. The name was chosen based on scientists' hopes that studying these asteroids will shine light on the earliest days of our solar system.

That's because Lucy will swing by a stunning variety of solar-system artifacts. First, in 2025, it will stop by the main asteroid belt between Mars and Jupiter. Then, it will continue on toward Jupiter, which orbits the sun smack between two clumps of Trojan asteroids. Between 2027 and 2033, Lucy will fly by six different asteroids, including three different subclasses and two objects that rotate around each other in a binary pair.

When Lucy finally launches, it will join the ranks of other NASA missions that have sought the mysteries of the solar system within asteroids, including the Dawn mission, which is ending its journey at dwarf planet Ceres, and the OSIRIS-REx mission, which is just now reaching an asteroid called Bennu.