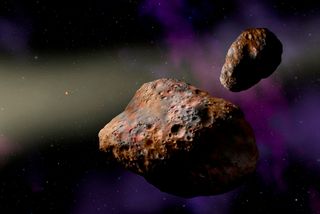 A strange pair of space rocks twirling around each other as they orbit the sun has helped scientists pinpoint when our solar system developed its current formation.

That's according to new research on Patroclus and Menoetius, a strangely large binary asteroid that chases Jupiter. It's in one of two special clusters of dozens of space rocks, one ahead of Jupiter and one behind the gas giant, that scientists call Trojans.

"The Trojans were likely captured during a dramatic period of dynamic instability when a skirmish between the solar system's giant planets — Jupiter, Saturn, Uranus and Neptune — occurred," David Nesvorny, lead author of the new research and a planetary scientist at the Southwest Research Institute in Texas, said in a statement released by the facility.

As Uranus and Neptune were pushed farther from the sun, they ran into what later became the Kuiper Belt that rings our planetary neighbors. In the process, they kicked some of those objects inward, where they got stuck as Trojan asteroids.

But binary asteroids come with a timestamp of sorts: They were easiest to form early in the solar system's history, when there were more chunks of rock flying around the place. So the scientists behind the new research used models to study how a large binary asteroid like Patroclus-Menoetius could have snuck into the Trojan groups.

Those models suggest that their journey must have taken place about 100 million years after the solar system formed, much earlier than previous estimates. Otherwise, it's likely the pair would have been broken up because of interactions with other space rocks before they could migrate in toward Jupiter.

If this early reshuffling date holds up, it could have implications closer to home as well, the authors wrote. It would mean the objects that were flung about during the Late Heavy Bombardment period, about 400 million to 700 million years after the formation of the solar system, would have come from the inner solar system. Their scars are still visible, particularly on the surface of the moon and Mars.

The research is described in a paper published yesterday (Sept. 10) in the journal Nature Astronomy.

Scientists interested in the Patroclus-Menoetius pair hope these odd rocks are hiding plenty more secrets — and they're building a NASA spacecraft called Lucy, due to launch in 2021, to visit a handful of asteroids, including the pair.