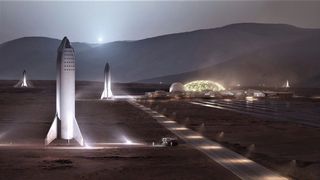 NASA's next 60 years will probably be very different than its first six decades.

When the agency opened for business in 1958, private spaceflight was just a sci-fi dream. But companies such as Elon Musk's SpaceX and Jeff Bezos' Blue Origin are working to make that dream a reality and open the space frontier to huge numbers of people for the first time.

What role will NASA play in the private sector's liftoff? Space.com recently talked to three commercial-spaceflight experts to get some ideas. [How to Become an Astronaut]

First, people should understand that about 75 percent of the worldwide space enterprise is already commercial, said Scott Hubbard, an adjunct professor in the Department of Aeronautics and Astronautics at Stanford University.

This includes the satellites belonging to DirecTV and Sirius XM radio. What's new s"is the extension of that into the human realm," said Hubbard, who also previously directed NASA's Ames Research Center in Silicon Valley. He served as the agency's "Mars czar," restructuring NASA's robotic Red Planet-exploration program after it suffered several failures in the 1990s.

And if private companies can get the price of a suborbital flight down to about $50,000, "you get a lot of interest," Hubbard told Space.com.

The highest-profile program currently in the works between NASA and the private sector is the agency's Commercial Crew Program, said Eric Stallmer, president of the nonprofit Commercial Spaceflight Federation.

Commercial Crew is encouraging the development of U.S. spacecraft that will carry astronauts to and from the International Space Station (ISS). Toward this end, NASA has awarded multibillion-dollar contracts to both SpaceX and Boeing, which are building capsules called Crew Dragon and CST-100 Starliner, respectively. These craft are currently scheduled to start flying astronauts sometime next year.

There's also the maturing commercial cargo program, which has given contracts to SpaceX and Northrop Grumman Corp. to fly robotic cargo missions to the ISS. Both of these companies have already completed numerous such flights.

Both Hubbard and Stallmer said that NASA wins by relying on private industry to provide such services in low Earth orbit. Hubbard argued that this strategy allows the space agency to continue "exploring the fringe where there really is no business case."

NASA has a budget about five times larger than the next biggest national space agency out there, but the U.S. agency's ambitious goals are still costly, said Stallmer. To get the most bang for the buck, "you'd have to leverage the innovation and technology that is in the private sector and let NASA do the exquisite" projects. [How Will a Human Mars Base Work? NASA's Vision in Images]

The "exquisite" projects, Stallmer explained, are the "push-the-envelope-type things on deeper space exploration."

"I see it not only as a cooperation or a collaboration, but maybe even interdependence," Hubbard said.

"Without a thriving spaceflight entrepreneurship sector, I don't think that deep-space exploration with [regular] people is sustainable," he added. "And I think using the way in which the private sector has demonstrated they can reduce costs, through more nearly assembly-line production techniques, is really critical to sustainable space exploration in the future."

Phil McAlister, director of commercial spaceflight at NASA, also advocated these public-private partnerships. Private companies offer the advantages of "being quick, being nimble, being fast, making a decision maybe without perfect knowledge — then moving forward and adjusting as required," McAlister told Space.com.

NASA officials, he said, "have a lot of meetings … a lot of discussions, and things tend to take longer" than in private industry.

"The private sector wanting to move fast and wanting to be cost-effective and NASA having our 50 years of human spaceflight experience … you bring those two things together, and they actually complement each other very effectively," McAlister said.

And there are more players within that private spaceflight "pie" now than there used to be, Stallmer said. Aerospace giants llike Lockheed Martin, Boeing and Northrop Grumman Corp. build hardware for NASA and the U.S. National Oceanic and Atmospheric Administration (NOAA), but they'll likely also continue pursuing big-dollar defense contracts. These standard government contractors are no longer the only options NASA can choose from.

"I see in the future," Stallmer said, "the contracts that historically went to the big three or the big four are going elsewhere. And you're seeing smaller, more-nimble companies entering the marketplace and competing for a lot of this work. So, it won't be just your standard government contractors … it's a much larger pool … to choose from."

McAlister also said there's now a big shift in who owns and operates spacecraft, as a result of nongovernment spaceflight customers.

"I think the emergence of nongovernment customers only really occurred in the last 10 or 15 years in the space industry," he said. "Prior to that, it was pretty much only NASA and governments [that] were the customers, and when you have that kind of scenario ... [it] makes sense for [NASA] to own and operate the hardware."

But, McAlister added, "when you have the opportunity for other customers, then it makes sense to shift some of that responsibility of development to the companies, to the private sector. Allow them to own and operate their hardware, and then they can sell it to other customers, and that brings the cost down for NASA and for everybody, because they can advertise their fixed cost over a larger customer base."

He called this "kind of a win-win scenario."

Who will these future spaceflight customers be? The rich, at least in the near term. After all, human space travel, even to the nearby suborbital realm, will likely remain quite expensive for a while, experts have said.

But that doesn't mean the rest of us have no role to play in the ongoing private-spaceflight revolution.