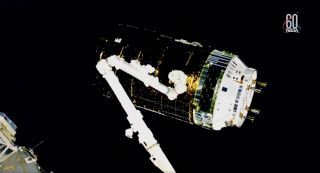 A robotic Japanese cargo vessel has arrived at the International Space Station (ISS), five days after lifting off.

"We're delighted to see HTV-7 arrive at ISS," NASA astronaut Drew Feustel, the commander of the station's current Expedition 56 mission, said as he thanked the teams in Japan and NASA for their work. "It's always breathtaking for us to see another spacecraft orbiting alongside the space station and join up on this incredible international journey in space."

Feustel and his crewmates can now begin off-loading the cargo HTV-7 brought up: more than 5 tons (4.5 metric tons) of food, fuel, supplies and scientific hardware.

"HTV" is short for "H-II Transfer Vehicle." As its name suggests, the current mission is the seventh overall for the HTV, which is also known as Kounotori (Japanese for "white stork").

HTV is one of four robotic spacecraft that carry cargo to the ISS. The other three are Russia's Progress vehicle, Northrop Grumman's Cygnus freighter and SpaceX's Dragon. The SpaceX craft is the only one designed to be reusable; HTV, Progress and Cygnus vehicles all burn up in Earth's atmosphere when their orbital work is done.