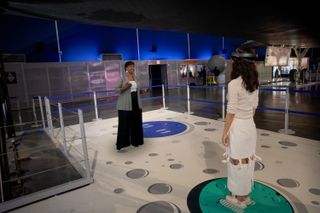 You can see a hologram of NASA astronaut Mae Jemison at the Intrepid Sea, Air & Space Museum in New York.

NEW YORK — Visitors at the Intrepid Sea, Air & Space Museum on the Hudson River here can now come face to face with a hologram of Mae Jemison, the first African-American woman in space.

Located beneath the space shuttle Enterprise, the new "mixed-reality" experience uses Microsoft HoloLens headsets to lead visitors on a journey through the history of trailblazing women at NASA — and a holographic tour of the inside of the space shuttle — with Jemison as as a tour guide.

During the 12-minute tour, Jemison's hologram uses holographic visual aids to share many of the significant achievements and contributions of women in the U.S. space program. The featured pioneers include the first women to undergo spaceflight training (a group known as the "Mercury 13"), the "hidden figures" who calculated orbital trajectories for the first men in space and NASA's record-smashing astronaut Peggy Whitson, who has spent more time in space than any other American. [Women in Space: A Gallery of Firsts]

While the exhibit focuses on women in space — hence the title, "Defying Gravity: Women in Space" — you won't find only a bunch of holographic women hanging out underneath the Enterprise. Through the HoloLens headset, you can also explore the inside of a space shuttle, watch an astronaut take a spacewalk and peek inside the window of a Project Mercury space capsule.

"Defying Gravity: Women in Space" opens to the public today (Sept. 22) during the seventh annual Space & Science Festival. The exhibit's grand opening coincides with Smithsonian magazine's Museum Day, when museums and other cultural institutions across the U.S. will grant free admission to anyone who downloads a free ticket. You can get free tickets to the Intrepid Museum here.