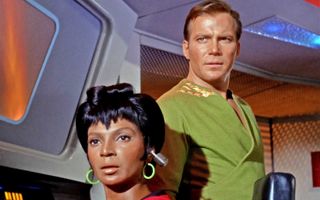 NEW YORK — The original "Star Trek" series is one of the most popular sci-fi series of all time. But for years, it was a flop that left William Shatner performing out of the back of his truck.

"Star Trek" broke countless boundaries, solidified science fiction in popular culture, and sparked a relationship with fans for 50 years and counting, and it remains one of the most beloved television shows in history. But it wasn't always this way.

On Sept. 5, Shatner, who played Capt. James T. Kirk in the series, joined the podcast "The James Altucher Show" on stage here at the comedy club StandUp NY to discuss his new book, "Live Long And …: What I Learned Along the Way" (Thomas Dunne Books, 2018). Space.com attended the event, where Shatner also discussed the show's difficult early years. Indeed, "Star Trek" wasn't an instant success.

"We were being canceled every year … They were canceling, and they weren't canceling," Shatner recalled during the podcast. "The third year, we limped along Friday nights." And, after the third season, the show was canceled. [The Evolution of 'Star Trek' (Infographic)]

In the months and years following the cancellation of "Star Trek," Shatner and the rest of the cast weren't given many offers, jobs or accolades. In fact, as Shatner explained during the taping, after the show was canceled, he toured around the East Coast in his truck, producing, directing and acting in his own performances, often with other known actors.

"I did star in 'Star Trek,' and I was living in the back of a truck," Shatner added, laughing. He performed funny, theatrical comedies and other acts that were popular at the time. Shatner recalled that he started to notice people paying attention to "Star Trek" while at a ski lodge where a blooper reel from the show — originally made as a personal gift to cast members — was playing.

As network executives continued to see interest from the public, Shatner said, "Star Trek" reruns began to play more often on television, and at more popular times. Obviously, the series eventually took off and became astronomically popular and internationally beloved.

Still, the actors whose faces and names will forever live in the sci-fi hall of fame struggled financially because they were not getting residuals from the series, Shatner said. Without delving too far into actor compensation and how unionization gave later actors more financial security, Shatner noted that "saying yes" helped him to survive and continues to help him thrive and lead an incredible life. As he put it, "Saying yes to the various things in your life is critically important."

Indeed, Shatner is no stranger to saying "yes." The face behind Capt. James T. Kirk has said "yes" to everything from writing, to music, to sending a message to NASA Voyager probes.