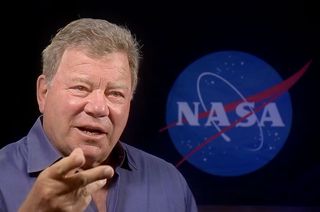 William Shatner, seen here in a 2016 NASA video, has signed up to take a weightless flight with the Zero Gravity Corporation on Aug. 4, 2017.
(Image: © NASA via collectSPACE.com)

This August, William Shatner will get closer to the final frontier than he ever did in his "Star Trek" days.

The 86-year-old actor, who famously portrayed Captain James T. Kirk in the original "Star Trek" TV series and a number of movies, has signed up for an Aug. 4 flight with the Zero Gravity Corporation (Zero-G). The Virginia-based company sells rides on its modified Boeing 727 aircraft G-Force One, which flies in a series of parabolic arcs to give passengers brief tastes of weightlessness.

"Going weightless will turn a dream into reality," Shatner said in a statement. "I've always wondered what it would be like to actually explore the final frontier, and now I have the opportunity to experience zero gravity firsthand. It will be an incredible adventure."

You have a chance to share this adventure with Shatner, if you wish: Zero-G is selling a limited number of tickets aboard the actor's flight for $9,950 apiece, plus 5 percent tax. (For perspective: a seat aboard a normal Zero-G flight runs $4,950, plus 5 percent tax.) Go to Zero-G's website if you're interested.

Shatner will be following in the footsteps of fellow "Star Trek" alum George Takei, who played crewmember Hikaru Sulu. Takei flew with fans aboard a special Zero-G flight in August 2016, to help celebrate the 50th anniversary of the iconic TV series' debut.

And in September 2015, Nichelle Nichols, who portrayed Lt. Uhura on the show, took a space-related flight of a different nature. She flew with scientists and educators aboard NASA's Stratospheric Observatory for Infrared Astronomy (SOFIA), a Boeing 747 equipped with a 100-inch (2.5 meters) telescope.

During the 10-hour flight, SOFIA studied several different star-forming regions, as well as a protostar in the constellation Taurus. Nichols and her fellow "Airborne Astronomy Ambassadors" answered fans' and students' questions throughout the flight and during their preflight training.