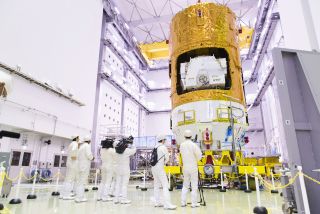 Japan's space agency has postponed the launch of its next cargo-ship mission to the International Space Station due to bad weather from a typhoon.

The Japan Aerospace Exploration Agency  (JAXA) had planned to launch Kounotori7, its seventh cargo ship to resupply the station, today (Sept. 10) at 6:32 p.m. EDT (2232 GMT, 7:32 a.m. local time on Sept. 11). But strong winds and other "adverse weather" were expected at the mission's Tanegashima Space Center  launch site in southern Japan.

"In Guam, where there is one of JAXA's tracking stations, adverse weather including strong winds caused by a typhoon is predicted for the day before and launch day," JAXA officials wrote in a status update Sunday (Sept. 9). A new launch date will be announced once it is determined, they added. [Japan's Space Cargo Ship Fleet in Photos]

JAXA's Kounotori7 mission will mark the agency's seventh launch of its H-II Transfer Vehicle, an uncrewed cargo ship designed to haul cargo to the International Space Station and then intentionally burn up in Earth's atmosphere once its mission ends. Kounotori means "white stork" in Japanese.

Japan's Kounotori spacecraft are brilliant gold cylinders about 33 feet (10 meters) long and 14.4 feet (4.4 m) wide. They can carry about 6 metric tons of supplies for space station astronauts. Some of those supplies are packed inside a pressurized compartment accessible by astronauts. Other equipment is stored in an unpressurized compartment that can be accessed by the station's robotic arm for installation on the orbiting laboratory's exterior.

The Kounotori7 mission will deliver many science experiments for the station's Expedition 56 crew, according to NASA. The spacecraft is also carrying six new lithium-ion batteries that will be installed on the space station's exterior during a series of upcoming spacewalks by astronauts.

Kounotori7 is also carrying a highly anticipated space elevator technology experiment (two small cubesats that will deploy a tether and tiny railcar in space) that is expected to be deployed from the space station later this month.

The mission will also test a new space technology for Japan, the HTV Small Re-entry Capsule, which is designed to separate from a Kounotori spacecraft before it burns up to return samples to Earth.

According to a JAXA mission timeline, the re-entry capsule will be attached to a hatch inside the pressurized compartment of the spacecraft before the cargo ship leaves the space station. It will then separate from Kounotori7 just after the spacecraft performs a deorbit burn (when it fires its engines to leave orbit) and re-enter Earth's atmosphere. The capsule will use a parachute to splash down in the Pacific Ocean, where it will be retrieved by a recovery ship, JAXA officials said.