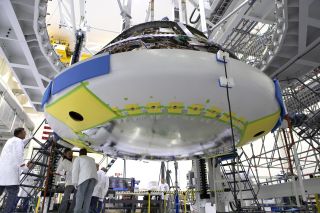 NASA's Orion spacecraft — which will eventually carry humans to locations beyond low Earth orbit, such as the moon — just got its heat shield for a test mission that will take place in 2019 or 2020. For this mission, Orion will also have a new block structure that will protect the spacecraft as it makes a fiery re-entry into Earth's atmosphere.

Technicians recently bolted the heat shield onto the Orion spacecraft at NASA's Kennedy Space Center (KSC) in Florida, NASA officials said in a statement. This is just one of the steps to prepare the spacecraft for Exploration Mission-1, on which an uncrewed Orion will fly for three weeks in space to a location some 40,000 miles (64,000 kilometers) beyond the moon, before returning back to Earth. [Exploration Mission-1 in Pictures: How Orion Will Fly to the Moon]

The heat shield is 16.5 feet (5 meters) in diameter and has a complex structure to help it survive the searing heat of the atmosphere during Orion's plunge back to Earth. NASA anticipates Orion's heat shield will need to withstand temperatures of nearly 5,000 degrees Fahrenheit (2,800 degrees Celsius).

The base structure of the heat shield is a titanium truss covered with a composite substrate (or skin) that has several layers of carbon fiber. But what makes this heat shield stand out is a new process that includes blocks of an ablative material called Avcoat, which is being produced under a license from Boston-based Textron Systems.

Avcoat has been used on the heat shields of other spacecraft as well, including those for the Apollo human moon missions of the 1960s and 1970s, and the previous flight of Orion, in 2014 (called Exploration Flight Test 1, or EFT-1). But this latest mission is unique because engineers are creating blocks of material instead of injecting it directly onto the heat shield.  [Orion Capsule Turns Heads on White House Lawn (Photos)]

"A benefit of switching from the honeycomb system to the blocks is, we now can make the Avcoat blocks at the same time that the Orion structure is being made, and when the module is ready, we can secure the blocks, which saves time," John Kowal, Orion thermal protection system manager at NASA's Johnson Space Center in Houston, said in the statement. "Before, with EFT-1, we had to wait for the carrier portion to be done, and then apply the Avcoat directly to the crew module."

The Avcoat was produced by Lockheed Martin at NASA's Michoud Assembly Facility in New Orleans, and then was shipped to KSC. There, Lockheed Martin technicians formed the material into 180 blocks and applied them to Orion's heat-shield surface.

"To fill tiny gaps between the blocks, the seams were filled with a mixture that, over time, will become solid," NASA officials said in the statement. "Technicians applied a coat of white epoxy paint to the heat shield's surface, and then applied aluminized tape after the painted surface dried. The tape provides surface resistivity, and absorbs solar heat and infrared emissions."

While this next Orion mission will have no crew on board, NASA anticipates eventually using the spacecraft to bring astronauts beyond low Earth orbit. The next priority of the current U.S. presidential administration is to start moon missions using a Deep Space Gateway space station. Eventually, the agency is supposed to prepare for human Mars missions as well.

Orion's prime contractor is Lockheed Martin, which designed and manufactured the spacecraft.