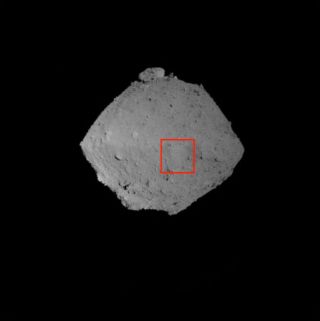 An image of asteroid Ryugu taken from about 1 km away by the Hayabusa2 spacecraft's Optical Navigation Camera – Wide Angle on Aug. 7, 2018. The red frame shows the range imaged by the telescopic camera (the image below in this story).
(Image: © JAXA, University of Tokyo, Koichi University, Rikkyo University, Nagoya University, Chiba Institute of Technology, Meiji University, University of Aizu, AIST.)

A Japanese sample-return spacecraft just gave its destination asteroid a special close-up. As Hayabusa2 swept to only 1 kilometer (0.6 miles) above the surface of 162173 Ryugu, it spotted boulders, dust and surface features only a few meters or feet across. It's by far the best view of Ryugu since the spacecraft arrived there about six weeks ago.

Several images from Ryugu show the surface of this space rock, which occasionally crosses the orbit of Earth, as it dipped down toward the asteroid. (Scientists classify Ryugu as a potentially hazardous asteroid, but there is no imminent threat to our planet.) In general, studying the surface of small worlds helps scientists better understand solar system history. Engineers can also use the composition information so that, if Earth is threatened by a large asteroid, they can better pick a deflection or destruction method.

This time around, though, the pictures were not the main reason Hayabusa2 swept so low. Instead, Japanese controllers were interested in better understanding the gravity of Ryugu. To do so, they put the spacecraft into a temporary free fall.

"By monitoring the exact movement of the Hayabusa2, we can see how strong the gravitational attraction is from Ryugu," officials with the Japan Aerospace Exploration Agency (JAXA) said in a statement today (Aug. 7).

The spacecraft started its descent at 10 p.m. EDT on Aug. 5 (0200 GMT on Aug. 6). From an altitude of 12.5 miles (20 kilometers), Hayabusa2 spent the next 21 hours in free fall, getting within 2,792 feet (851 meters) of the space rock, JAXA officials said. The spacecraft also took several images shortly before reaching that minimum altitude. Then, Hayabusa2 fired its thrusters and climbed back up again to a target altitude of about 3.1 miles (5 km).

These maneuvers will also be valuable practice for spacecraft controllers as they prepare to bring Hayabusa2 down for a sample return. The spacecraft is expected to scoop up a bit of Ryugu's regolith (soil) before scooting back to Earth in 2020. In the coming months, Hayabusa2 will also drop off a lander and three rovers to explore Ryugu's surface.

Hayabusa2, which launched in 2014, is the second sample-return mission Japan launched to an asteroid. The first spacecraft, Hayabusa, overcame numerous technical difficulties on its mission and safely returned bits of 25143 Itokawa in 2010.