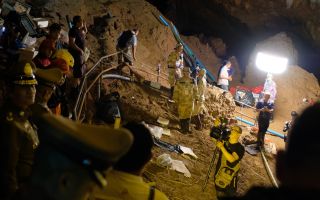 Thai officers supervise the rescue mission inside Tham Luang Nang Non cave on June 28, 2018 in Chiang Rai, Thailand. Twelve boys and their soccer coach have been trapped in the cave for nearly two weeks and rescue workers are working to get them out of the cave.
(Image: © Linh Pham/Getty)

Elon Musk is sending engineers from his SpaceX and The Boring Co. companies to aid in the rescue of a youth soccer team in Thailand that's trapped in a cave and running out of time.

Twelve boys and their 25-year-old soccer coach have been trapped in the Tham Luang cave in Thailand for almost two weeks as of today (July 6). The boys, who range in age from 11 to 16, were exploring the cave when a flash flood trapped them. As oxygen levels continue to drop, the boys are getting more and more exhausted, which in turn is leading to malnourishment among them. In addition, heavy rain is forecast this weekend for the area. Worried authorities say they fear time is running out to save the team.

Former Thai navy SEAL diver Saman Gunan (also reported as "Kunan") died early this morning (July 6) while working as a volunteer alongside a rescue team. Despite the rescue mission's extreme difficulty and danger, Musk is hopeful that his engineers can come up with a solution before it's too late. [Gallery: Rescuers Race Against Time to Save Soccer Team Trapped in Thai Cave]

"SpaceX & Boring Co engineers headed to Thailand tomorrow to see if we can be helpful to govt. There are probably many complexities that are hard to appreciate without being there in person," Musk wrote via Twitter early this morning.

It seems like Musk's aid mission began on Twitter. Twitter user @MabzMagz tweeted at Musk, asking if there were any way the billionaire entrepreneur — who runs the electric-car company Tesla — might be able to help. Musk responded and discussed possible solutions on Twitter with @MabzMagz and entrepreneur @Jamesworldspace.

Noting the relevant experience of these engineers, Musk added on Twitter that The Boring Co. "is pretty good at digging holes." (The company aims to alleviate traffic congestion in big cities by establishing a network of tunnels.)

Neither Musk nor his companies' representatives have yet to disclose any concrete rescue plans. However, "Once we confirm what exactly will be helpful to send or do, we will. We are getting feedback and guidance from the people on the ground in Chiang Rai to determine the best way for us to assist their efforts,” a spokesperson for The Boring Co. told The Verge.

So far, over 1,000 people are involved in the rescue of the boys and their coach, as reported by Live Science. Musk hopes that the additional input and help of his engineers will lead to a life-saving solution.

So far, Musk has posed a few hypothetical solutions on Twitter, including potentially inserting "a 1m diameter nylon tube (or shorter set of tubes for most difficult sections) through cave network & inflate with air like a bouncy castle. Should create an air tunnel underwater against cave roof & auto-conform to odd shapes like the 70cm hole."