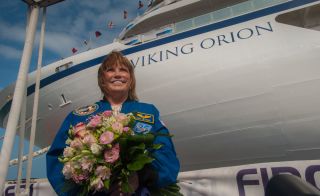 Retired NASA astronaut Anna Fisher was honored as the "godmother" of Viking Orion at the float-out ceremony in September 2017.
(Image: © Viking Cruises)

Retired NASA astronaut Anna Fisher, the first mother in space, has taken to the sea to become the "godmother" to Viking's newest ocean ship, Orion.

In July 2017, Fisher traveled on Viking's Rhine Getaway River Cruise, which sailed from Amsterdam to Basel, Switzerland. In celebration of her retirement, her friends had a NASA-themed cake made for her on the ship. After learning that Fisher had been an astronaut, Viking asked her to be the godmother of its next Ocean Cruise ship.

To be the godmother of Viking Orion "is an incredible honor," Fisher told Space.com. "Not everyone gets to be a godmother of a ship." [Astronaut Anna Fisher: The First Mom in Space (Photos)]

One of Fisher's first tasks as a godmother was to choose the ship's name. Orion seemed like the natural choice, Fisher said, since it is one of the most recognizable constellations in the night sky and can be used to find the North Star, which early explorers relied on to navigate the seas.

The ship's name also honors NASA's Orion spacecraft — the first crewed capsule designed to carry astronauts beyond low Earth orbit and the last project Fisher worked on before she retired in May 2017.

Around the same time Viking asked Fisher to be the ship's godmother, she also found out that she was going to be a grandmother.

"My daughter said to me, 'Mom, I think you're more excited about being a godmother of a ship than being a grandmother,'" Fisher said.

"We do that a lot in the space program — follow someone around so that you learn what to do when it's your responsibility," Fisher said.

After she learned the ropes, it was time to unveil Viking Orion. Fisher was honored as the ship's godmother at the float-out ceremony at the Fincantieri shipyard in Italy in September 2017, when Viking Orion touched water for the first time. (It would then move to the open water for more testing.)

During the float-out ceremony, Fisher welded four symbolic coins below the ship's mast as part of an ancient shipbuilder's tradition to ensure good fortune and safe passage at sea. The coins were inscribinscribed with the birth years of Viking Chairman Torstein Hagen; "Mamsen," Hagen's mother; Fisher; and Finse, the Hagen family's yellow Labrador.

The float-out ceremony marks a significant construction milestone for a ship and is an age-old tradition of the Romans, Greeks and Egyptians, according to Viking. The ship was later moved to a nearby outfitting dock for final construction and interior build-out in preparation for its maiden voyage, in June.

After Viking Orion was tested at sea, the official naming ceremony took place June 14 in Livorno, Italy. As godmother, Fisher offered her blessing of good fortune and safe sailing, which is a naval tradition that dates back thousands of years.

In many ways, the operation of a cruise ship is similar to the work that goes into a space mission, Fisher said.

"At the float-out, I already could see the similarities with the space program," Fisher told Space.com. "When we rolled out an orbiter … you could just feel the emotion of the workers because it was something they had put their heart and souls into building. I felt the same kind of a feeling at the float-out, being at the shipyard with the people that built this magnificent ship and seeing their attention to detail and safety."

Fisher added that her experience in the bridge of Viking Orion as it was docking also reminded her of the space shuttle docking with the space station.

"The similarities are really amazing," Fisher said. "The shuttle was like an airplane for launch and for landing, but once you go in orbit … the shuttle was oriented upside down, with one of the wings into the velocity vector. So I have always felt that it was more like a ship in orbit than an airplane."

Fisher flew as a mission specialist on the second flight of the space shuttle Discovery, STS-51A, in November 1984. She also served as chief of the Space Station Branch from 1996 to 2002, during the early construction days of the International Space Station.

"Now we have this beautiful space station up there," Fisher told Space.com. "Most of the ideas that we had initially had been implemented, and it is just so satisfying now to see Expedition 56, since I helped launch the first crew, Expedition 1."

As the ship's godmother, Fisher was allowed to invite her family, friends and colleagues to join the maiden voyage of Viking Orion.

Not only is it a "privilege to be the godmother, but to be able to say 'thank you' and give a gift to all of these people that are meaningful in my life … is an incredible honor," Fisher said.

Editor's note: Samantha Mathewson joined this space-themed cruise on an invitation from Viking as part of an unpaid media preview event for Viking Orion. Read more about her journey here.