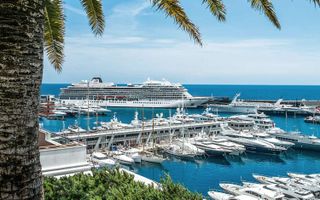 Space reporter Samantha Mathewson is sailing to Italy and France this week for the maiden voyage of Viking Orion, the newest ship of Viking's ocean fleet. Retired NASA astronaut Anna Fisher — the first mother in space — will be honored as the ceremonial "godmother" to Viking Orion during the cruise. The cruise ship is named after the constellation Orion the Hunter and in recognition of NASA's Orion spacecraft — the first crewed capsule designed to carry astronauts beyond low Earth orbit, and the last project Fisher worked on before she retired in May 2017.

"Vikings were the original long-distance explorers and the first to use the stars and constellations as a way to navigate uncharted territory," Viking chairman Torstein Hagen said in a statement. "The spirit of exploration is at the heart of everything we do, and so I am especially proud that an astronaut will be honored as godmother to our new ship." The maiden voyage will sail from Rome to Barcelona June 13 through June 19. Live updates from the Viking Orion will be posted here throughout the trip, so stay tuned! Related: Stargazing in the Jungle? Why Costa Rica Is a Great Place for Skywatching [Sponsored]

Editor's Note: Samantha Mathewson is traveling on an invitation from Viking as part of an unpaid media preview event for Viking Orion.